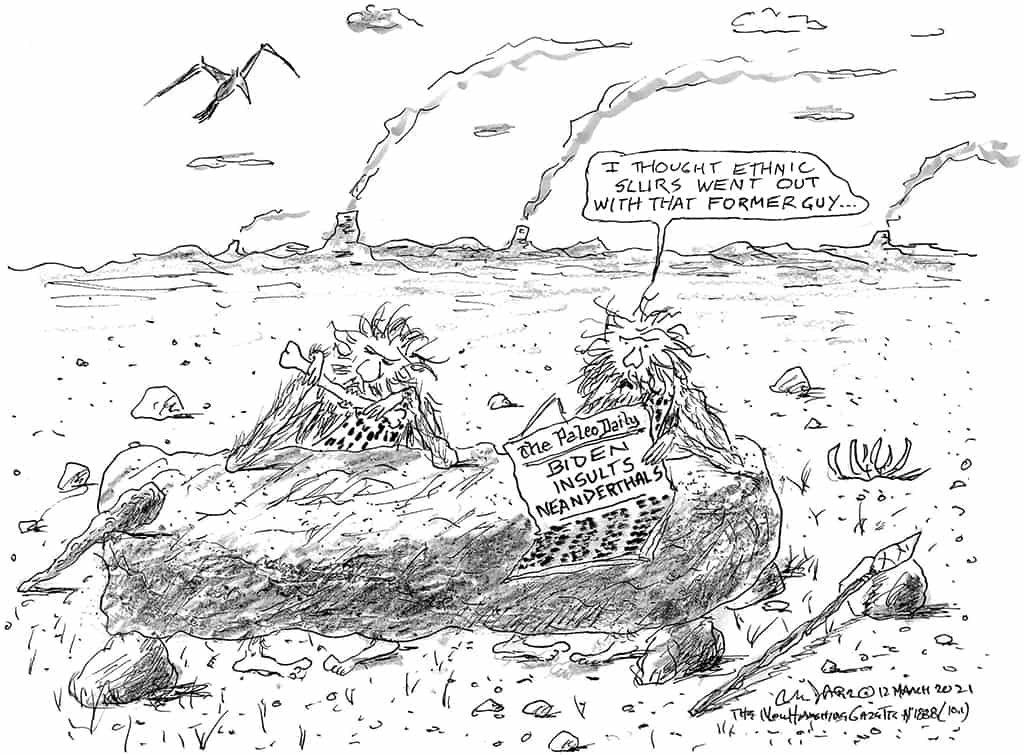 We are now seven weeks and change into a new era. You can tell things are different now; it’s actually quiet enough to think.

This is not to say, of course, that everyone will take advantage of that opportunity. It’s just to say that one of reality’s fundamental switches has been reset to the default position: no longer is the most powerful position on the planet being exploited solely to create and foster a certain brand of American Carnage™.

Now that all of us have been blessed with a greater degree of mental freedom than we’ve had for over four years, we can begin: begin to mourn how it’s being wasted. Because, let’s face it, all of us are still just sacks of semi-sentient protoplasm, stumbling around and wondering what the hell’s going on.

The only reason most of us have any idea what to do each day is because we can more or less recall what we did yesterday. We do not pretend, by the way, to be saying this from some lofty, superior perch. Hell, we’re a prime offender; we just do the same thing on a fortnightly basis.

Sometimes, of course, we make a mistake. After we do, though, at least we try to avoid stepping on the same damn rake.

Due to our relatively modest reach, our fastidiousness on that point has limited effect. It might help if some other larger players in this racket would make an attempt to do the same.

Early results suggest that probably won’t happen. That’s unfortunate; what now seems like a bright new dawn could end up being just  a deluded interregnum between reigns of terror.

To illustrate our point we’ll turn to a recent dustup at the Blue Bird Saloon.

We have no idea what Jack Dorsey intended when he invented Twitter, but we’re willing to bet it wasn’t what he got: a wide-open space—part Wild West barroom, part urban hoop court—which every journalist on Earth seems to be passing through. As a result, Twitter plays host to a permanent debate on the state of journalism. This is no prissy, bow-tied, rules-based debate, though. It’s more like Al Swearingen’s Gem Saloon.

Maureen Dowd started the brawl on February 27th: “I’ve been waiting for this moment. The moment when some on the left would react indignantly to journalists doing their job.”

After relating a long, tedious anecdote reminiscent of a high school cafeteria, Dowd asserted that “many on the left don’t understand what a reporter is.

“They loathe Fox News but assume that the mainstream media are basically on their side, the same way Fox commentators are on Trump’s, laying the groundwork for him to start his second coming at CPAC this weekend.

“For the left, over the past four years, a reporter has been an ally and a superhero comrade in the epic mission of destroying Donald Trump. Liberals lionized any cable hosts and runaway Republicans who blasted Trump, even if they had previously been on the G.O.P. payroll, selling the Iraq war and Sarah Palin.”

Maggie Haberman, Dowd’s colleague at the Times, backed her up with a supportive tweet that quoted Dowd’s column.

The Times having a history of allowing itself be used as a propaganda laundromat resulting in a catastrophic pre-emptive war, not to mention falling for innumerable other GOP hoaxes from Benghazi!!! to “but…her emails,” that one-two punch set off just the sort of moment for which we hang around the Gem…er, Twitter.

Rosen succinctly nailed what we believe is the nation’s most serious problem: virtually everything that anyone “knows” which relates to our governance and democracy must come to us through a lens provided by our mass media. The shape of that lens is controlled by its owners. They want things done in a certain way. They want reporting done symmetrically.

From the lofty Times, right on down to the humble level of the Award-Winning Hedge-Fund Owned Daily, journalists can never be “on the team” of the people, because the outfits for which they work do not belong to the people.

Republicans—not all of whom are quite as dumb as they sometimes appear to be on television—don’t just know this, they understand it in their bones. They’ve been exploiting this weakness of the press since the days of Harry Truman.

They understand their demographics, too: their days are numbered, if future elections are held fairly. That’s why they’ve got anti-democratic—make that anti-Democratic—campaigns underway in Republican-run statehouses from coast to coast.

Democrats have long operated under Sunday School rules: play fair long enough and your virtue will be rewarded. If they don’t wise up pretty quickly, that reward will come as a punch in the face.

Right now, though, in Washington, they’re pushing H.R. 1, the For the People Act. It will help counter the Republican assault, if they can get it through the Senate. We’ll see how the press covers that battle.

Meanwhile, just to buck ourselves up for the fights ahead, we’ll roll out this favorite excerpt from “The Low Road,” by Marge Piercy:

Two people can keep each other

sane, can give support, conviction,

Three people are a delegation,

a committee, a wedge. With four

you can play bridge and start

an organization. With six

you can rent a whole house,

eat pie for dinner with no

A dozen make a demonstration.

A hundred fill a hall.

A thousand have solidarity and your own newsletter;

ten thousand, power and your own paper;

a hundred thousand, your own media;

ten million, your own country.