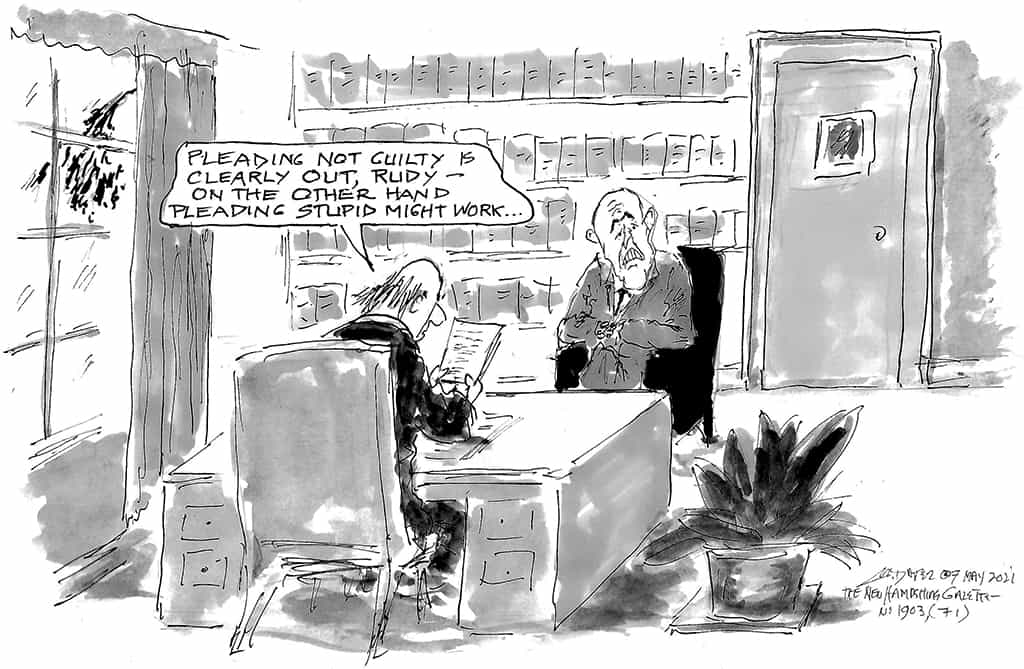 We have good news, and bad news. That, in itself, is not news, of course; the news is always good and bad, commingled. Such is the human condition.

Limited by the subjectivity of our own perceptions—not to mention the disorientation caused by an unending current of events frog-marching us into the future—we lack the chutzpah to declare whether this fortnight’s mix trends towards one pole or the other. We can say with confidence that every day, in every way, the news keeps getting more absurd.

The good news is that 81 percent of people around the world believe that democracy is important. The fourth annual Democracy Perception Index, questioning 50,000 people in 50 countries around the globe, found that support for democracy is as high as it has ever been.

Less reassuringly, in the same survey 44 percent said that the U.S. is a threat to democracy in their country.

The bad news is that they’re not wrong. Hell, we don’t allow democracy here in the U.S.—why should anyone else get to have it?

What are the filibustering U.S. Senate and the senescent Supreme Court for, after all, if not to keep a lid on the will of the people?

Those exalted Constitutional offices are but a fraction of today’s anti-democratic movement. Fox News should probably top the list of other elements, followed by our “objective” news media, tamed as they are by commercial restraints.

It all gets somewhat overwhelming. Fortunately for headline writers, nearly all of these forces may be summed up with three letters: GOP.

Largely by gerrymandering relatively uninhabited states, the Republican Party has entrenched itself in a nearly unassailable position. Understandably disinclined to risk that advantage in fair elections, it has mounted a two-fronted campaign: restrict ballot access to the Right sort of (white) people, and develop new strategies for overturning the occasional election producing unsatisfactory results.

To call the GOP “the world’s biggest threat to democracy,” though, would be to understate its menace. Democracy is not all that’s at risk. While other governments may strive to curb carbon emissions and stave off The Flood 2.0, our government’s response to humanity’s existential crisis is limited to whatever Mitch McConnell feels inclined to permit.

As if this traditional version of autocracy hadn’t been bad enough, now we are confronted with a mutant variety. Reflecting the party’s recent takeover by the QAnon cult, it has been referred to as the GQP.

This situation could be depressing, but we find it unproductive to wallow in a slough of despond. If we are condemned to a post-democratic hellscape by the insatiable greed of those to whom too much has already been given, we choose to keep busy, collecting evidence.

What we have so far assembled seems to suggest that power-hungry psychopaths run this show, aided and abetted by the terminally gullible. We have been unable to locate the boundary between cynical bad faith and credulity—but does it even matter?

This traveling circus has now pitched its tent in Maricopa County, Arizona. By the tried and true method of stomping their feet and holding their breath, sun-baked Republicans in Sheriff Joe Arpaio’s old bailiwick have been granted a third audit of the election Donald Trump lost six months ago. Biden won the county by more than two percent. A reversal would be…unlikely.

Nevertheless, Arizona Senate President Karen Fann persisted, throwing $150,000 in state funds at an outfit called Cyber Ninjas. This is the company’s first election audit. Its founder, Doug Logan, had posted messages online supporting Rudy Giuliani’s “Stop the Steal” hoax. He has since deleted them, though, so his objectivity is apparently no longer in question.

Because the allocated state funds won’t be enough to complete the audit of 2.1 million votes, “private donations have been solicited,” according to the non-partisan, nonprofit ethics watchdog American Oversight, “by the Arizona Republican Party, the pro-Trump OANN [a ‘news’ network], the audit’s Senate liaison, and promoters of voter-fraud conspiracy theories.”

The day the audit began, the Arizona Republic’s Jen Fifield “noticed the [ballot] counters had blue pens. Supposed to only have red when you’re around ballots since ballots can read black and blue ink. … I pointed this out to Doug Logan with Cyber Ninjas…He told me that his understanding was that blue ink was fine—that the ballots only read black ink. Then he came back and said actually it seems I am correct. But he still seemed unsure. He said that they would work on this.”

An audit team member told CBS on Wednesday that a forensic analysis had begun: Jovan Hutton Pulitzer was scrutinizing the ballots, searching for any telltale bamboo fibers. If found they would confirm a rumor that 40,000 Chinese ballots for Biden may have been flown in from Southeast Asia. Pulitzer’s prior claim to fame was his invention of the CueCat—a useless cat-shaped barcode reader on which his investors lost $185 million.

But wait! There’s more! A clip from “Curse of Oak Island” shows Pulitzer telling Marty and Rick that at the bottom of their hole in Nova Scotia lies…the Ark of the Covenant!

Due to a 300-ballot counting snafu, Windham, N.H. is about to get its own election audit. Yesterday a certain former president sent his “Congratulations to the great Patriots of Windham” for “their incredible fight” to expose non-existent fraud. He’s referring to a noisy demand a mob made Monday: hire Jovan H. Pulitzer for the audit.