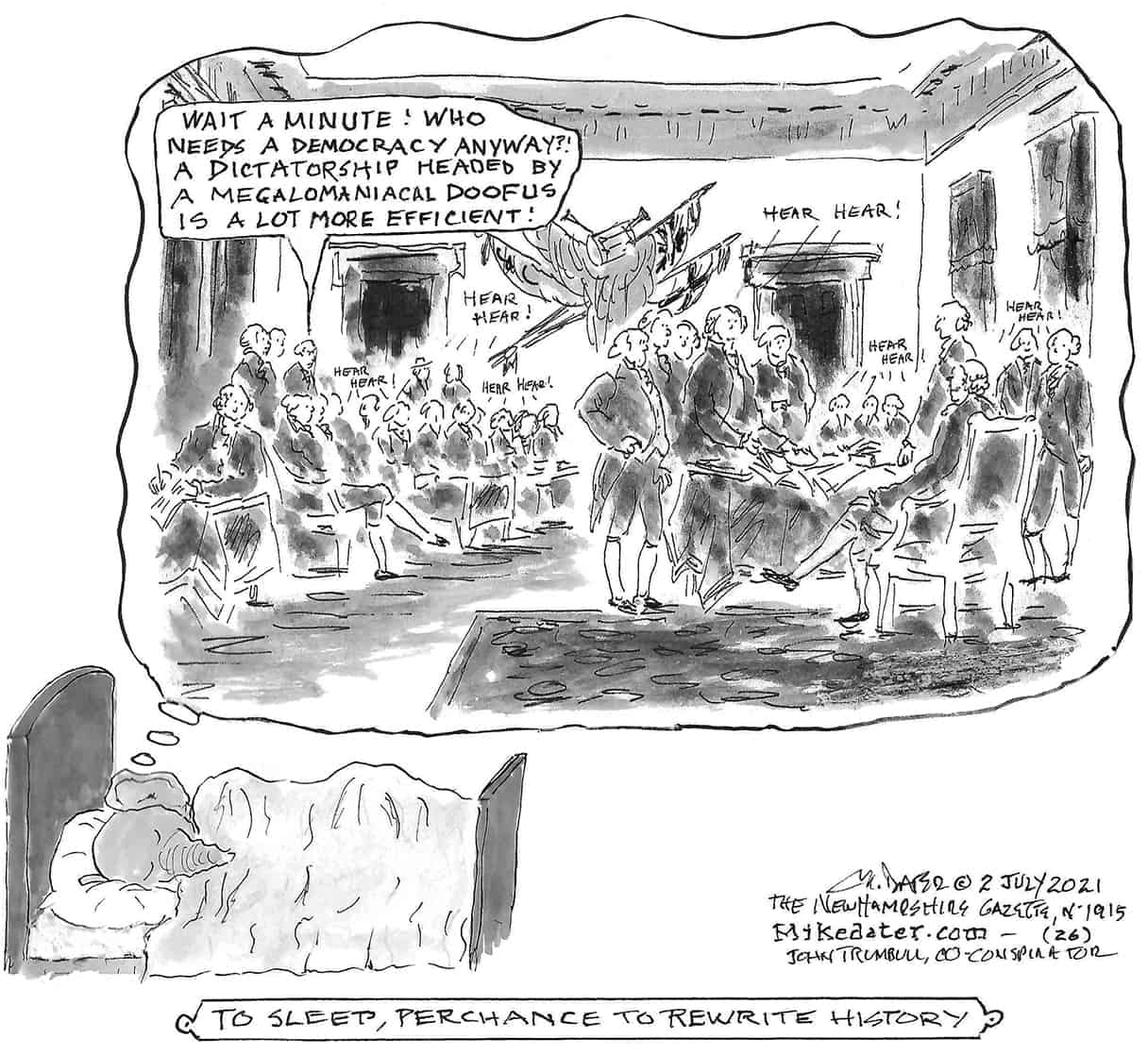 Come Sunday it will have been 245 years since the U.S. of A. told King George III, “Thanks, we can handle it from here on our own.”

So, how’s that working out?

Let’s be optimistic and call it a mixed bag.

We’ll begin with the meta-news. This will be our third paper since we resumed our traditional practice of manifesting on a substrate of newsprint. The distribution of said newsprint—always the true challenge—is going well enough; the downtown crew has been exceptional. On the editorial end, of course, there is infinite room for improvement. The true highlight has been the enthusiasm of readers and subscribers. Apparently they’ve missed the tangible results of whatever it is we’re doing here. All in all, not bad for a newspaper that was nearly twenty years old on July 4, 1776.

What, though, of the nation?

What, indeed? Or, as just about everyone says these days, WTF?

Back in the day—by which we mean the 18th century—handwritten letters and newspapers like ours were what passed for social media. Despite—or perhaps because of—the absence of Facebook and Twitter, these were men—they were all men, and white ones at that—who knew each other. Hence all the talk about creating “a nation of laws, not men.”

The Founding Fathers knew better than to trust each other. Their mutual distrust was embodied in the design of the divided government they eventually created; its three branches are but a slightly more dignified version of the three-man cemetery shootout at the end of The Good, the Bad, and the Ugly.

A nation of laws administered by men—and women, these days—is a nation in permanent need of remedial education on the topics of human weakness, perversity, and just plain weirdness. Perhaps it is a sign of a finely-tuned universe that those lessons keep coming with such regularity.

For about half a century, John N. Mitchell held the undisputed title of Worst U.S. Attorney General Ever. It’s hard to beat his primary qualification: 19 months in a federal penitentiary. Having his vivacious wife Martha silenced with drugs and kidnapping earns him extra points for style.

Now, for the first time, Mitchell has a serious challenger. William Barr earned that spot eight months before his nomination by submitting a job application, in the form of a 20-page memo arguing that Robert Mueller’s investigation into Russia’s role in the 2016 election was inherently illegitimate.

Trump had always wanted an AG who would serve as his personal lawyer. Now, in Barr, he had one. When the Mueller Report was issued, Barr stuffed it in a drawer and lied to the public about what it said. Barr backed up Trump’s bogus claims about being unfairly “spied on” by the Justice Department, and meddled in myriad cases against members of the Trump crime family.

Now, for reasons which we cannot know, but, given his record, we must presume to be devious, he’s attempting to rehabilitate his image by granting an interview to The Atlantic’s Jonathan Karl. The resulting article could never make up for Barr’s terrible tenure in office—not to mention his ex-boss’s—but should reinforce the lesson the Founders encoded in our form of our government: trust men at your peril.

On December 1st—while Donald Trump was howling about a stolen election and voter fraud, five days before his failed autogolpe at the Capitol—Barr mumbled to an AP reporter on the Justice beat, “To date, we have not seen fraud on a scale that could have effected a different outcome in the election.”

Cut to Trump’s personal dining room, near the Oval Office. Karl writes, “Barr’s AP interview was dominating every cable news channel except the one Trump was watching. The television in the room was tuned to the right-wing, pro-Trump network One America News, which was broadcasting a committee hearing of the Michigan legislature. The hearing featured disproven allegations of massive election fraud….”

Trump, with “the eyes and mannerism of a madman,” screams at Barr, “How the [bleep] could you do this to me?”

Such were the waning days of the Trump administration. The White House, we’re told, is a lot calmer these days.

The former guy has taken his show back on the road. He recently delivered rambling, deranged monologues in front of adoring fans in Ohio and Texas. Unmasked attendees heard their idol repeat his favorite lies as some of them, no doubt, passed along the Delta variant.

One venue on Former’s wish list is the very Capitol building trashed by his followers on January 6th. Not as a tourist in traditional tactical gear, though. He wants to be the Boss. It turns out that the Speaker need not be an elected Member of Congress. Those Founding Fathers—what a bunch of jokers!

Brian Kilmeade, a babblemonger for Fox “News,” recently asked House Minority Leader Kevin McCarthy, “Would you be for President Trump becoming Speaker [of the House]?” McCarthy replied, “You know, I’ve talked to President Trump many times. He tells me he wants to be Speaker.”

It seems unlikely now, but so was the White House in June of 2015. We want to know whether that can be prevented by putting him in Leavenworth.

Unable to grasp reality, unwilling to govern when in office, Republicans still seem compelled to hold onto power. It’s time to retire old nicknames like the Party of Lincoln—obviously obsolete—and GOP, for Grand Old Party. We could simply call it The Party. There’s plenty of precedent; e.g., Red China, Orwell’s 1984, &c. &c.

Shift the burden of taxation to those least capable of paying and most in need of services—namely those the private sector finds unworthy of a living wage. Reduce income taxes on upper brackets to zero or below. Any government services provided on a fee-for-services model only….

Just as the Founders intended.