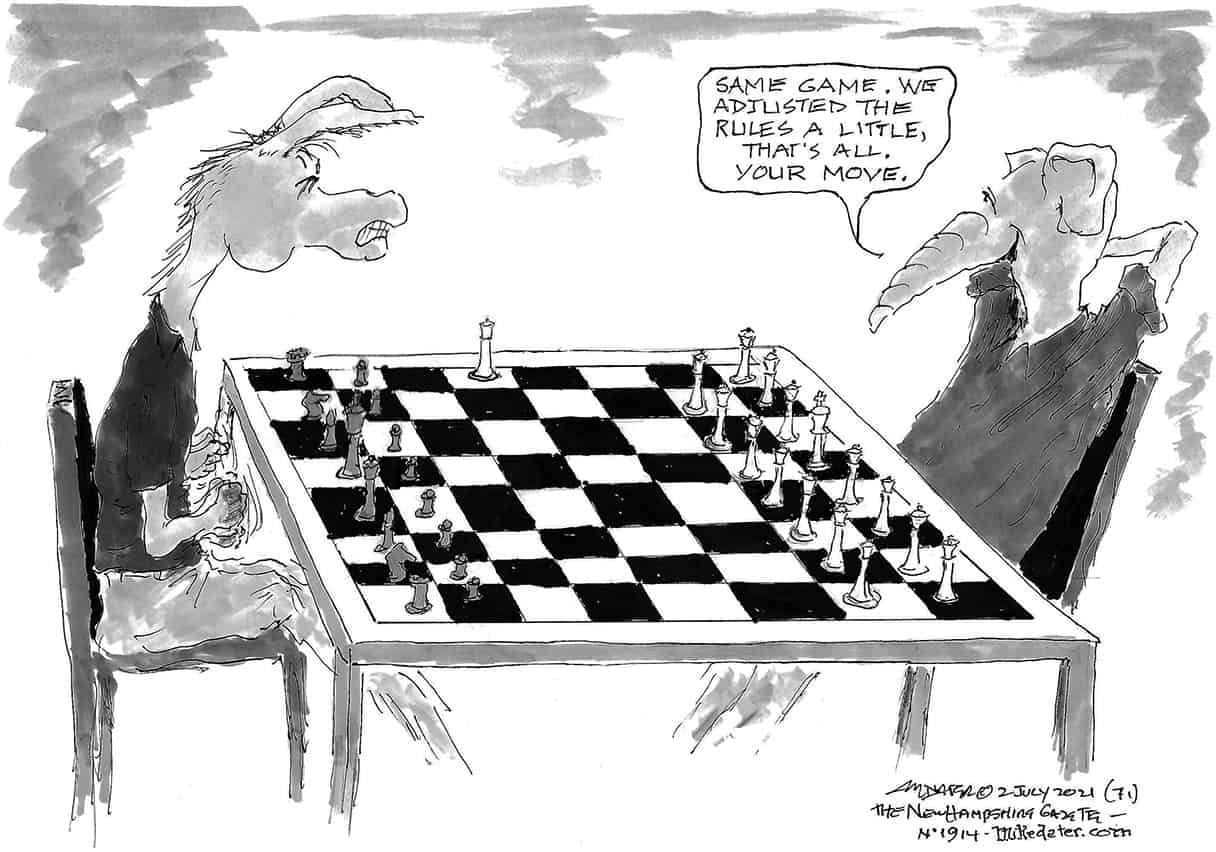 The growing concentration of wealth in fewer hands—including among corporate robber barons’ descendants who continue, after multiple generations, to wield the “financial, political, and philanthropic clout” afforded by enormous inheritances to “advance their dynasty-building agenda”—intensifies working-class suffering in the U.S. and poses a threat to society and democracy.

That’s according to Silver Spoon Oligarchs: How America’s 50 Largest Inherited-Wealth Dynasties Accelerate Inequality, a new report out June 16th from the Institute for Policy Studies.

Analyzing data from Forbes, IPS tracked the assets of the country’s 50 wealthiest families—“including the Waltons, the Kochs, the Mars family, and many others, some well-known and others relatively unknown”—from 1983 to 2020.

“By 2020, the 50 families had amassed $1.2 trillion in assets,” researchers found. “By comparison, the bottom half of all U.S. households—an estimated 65 million families—shared a combined total wealth of just twice that, at $2.5 trillion.”

The “staggering” fortunes of dynastic families, whose “wealth is becoming increasingly persistent,” increased at “10 times the rate of ordinary families,” IPS pointed out.

“For the 27 families that were on both the Forbes 400 list in 1983 and the Forbes Billion-Dollar Dynasties list in 2020,” wrote the report’s authors, “their combined assets have grown by 1,007 percent over those 37 years. This is an increase from $80.2 billion to $903.2 billion in inflation-adjusted dollars. In contrast, between 1989 and 2019, the wealth of the typical family in the U.S. increased by just 93 percent in inflation-adjusted dollars.”

Moreover, “those at the very top are blowing away even their closest competition,” the report said. “The five wealthiest dynastic families in the U.S. have seen their wealth increase by a median 2,484 percent from 1983 to 2020.”

The past 15 months, in particular, have been a boon for dynastic families, who have enjoyed substantial wealth gains amid the Covid-19 pandemic.

“Since the start of the pandemic in March 2020, the top 10 families on the Forbes dynasty list have had a median growth in their net worth of 25 percent,” researchers found. IPS has consistently highlighted the skyrocketing amount of wealth held by the nation’s 660 billionaires, who have seen their combined fortunes balloon by more than $1.1 trillion amid the Covid-19 pandemic.

“Much of the media’s focus today is on new wealth billionaires like Jeff Bezos, Mark Zuckerberg, or Elon Musk, who have become centi-billionaires in their lifetimes,” noted the progressive think tank.

Chuck Collins, co-author of the report and author of the new book, The Wealth Hoarders: How Billionaires Pay Millions to Hide Trillions, said in a statement that “when we focus on the surging fortunes of first-generation billionaires—and their shocking tax avoidance—we forget to look at the troubling growth of dynastic families and the changes in tax policies that will enable the children of today’s billionaires to become tomorrow’s oligarchs.

“In a healthy democratic society with a functioning tax system, wealth disperses over decades as people have children, pay their taxes, and give to charity,” Collins added. “But with a weak tax system on wealth—as confirmed by the recent leak showing low billionaire taxes—we are now seeing wealth accelerate over generations, leading to consolidated wealth and power,” he said.

According to the report, the children and grandchildren of some corporate executives—“who may be up to seven generations removed from the original source of their family’s wealth”—tend to “focus less on creating new wealth and more on preserving existing systems that extract ongoing rents from consumers and the real economy.”

“America’s dynastic families, both old and new, are deploying a range of wealth preservation strategies to further concentrate wealth and power—power that is deployed to influence democratic institutions, depress civic imagination, and rig the rules to further entrench inequality,” the authors wrote. “This tax avoidance means less support for the infrastructure we all rely on to preserve our health, safety, and quality of life.”

IPS drew attention to the strategies that inherited-wealth dynasties use to consolidate their vast economic fortunes and fortify their immense political power:

• Dynastically wealthy families wield a great deal of political power and use it to further their interests. Some dynastic families spend millions lobbying for favorable tax, labor, and trade policies. Several have corporate political action committees which give millions to candidates and campaigns. Many family members give to candidates and PACs; several serve on policy advisory boards; and a few have served in government themselves, including as governors, cabinet members, and even vice president.

• Dynastic families exploit their philanthropic power too, through charities and foundations. The top 50 families have set up more than 248 foundations among them, housing more than $51 billion in assets. While many move much-needed revenue to broader public interest charities, others fund groups working to reduce taxes on the wealthy and roll back regulations that constrain corporate profits. Some funnel millions to donor-advised funds, which can fund dark-money political advocacy. And in a few cases, family members have used them to compensate themselves.

“Members of the Busch, Mars, Koch, and Walton families have together spent more than $120 million over the past 10 years lobbying for taxation, labor, and trade policies favorable to their interests and investments,” according to IPS.

To counter the anti-democratic influences of dynastically wealthy families that “have gained massive and unaccountable financial, political, and philanthropic power…while giving relatively little back to the society that has enabled their fortunes,” IPS called for “a more progressive tax system as well as new efforts to shut down the hidden wealth system.”

• Greater oversight and enforcement by the IRS, as outlined in the Stop Cheaters Act introduced in February by Rep. Ro Khanna (D-Calif.);

• An annual wealth tax, as Sen. Elizabeth Warren (D-Mass.) proposed in the Ultra-Millionaire Tax Act she unveiled in March;

• A progressive estate tax, as outlined in the For the 99.5 Percent Act introduced in March by Sanders and Rep. Jimmy Gomez (D-Calif.);

• An inheritance tax on heirs; and

However, “none of these proposals will succeed,” IPS stressed, “unless the U.S. shuts down the tax loopholes, offshore tax havens, and dynasty trusts that enable the very wealthy to hide their wealth at a dizzying pace.”

In order to “shut down the hidden wealth system,” IPS urged Congress and the White House to:

• Establish a federal rule against perpetuities, which would limit the lifespan of trusts;

• Outlaw certain types of trusts; and

In their conclusion to the report, the authors emphasized that “these trends are alarming for the health of a republic that aspires to widely held prosperity and opportunity.”

“If we stay on our current trajectory, families of inherited wealth will exert ever more control over public policy and the public pocketbook,” they added. “But we can choose to move in a new direction: to enact economic policies that strengthen society as a whole, ensuring equal opportunity and dignity for all, not just the very few.”

Occupy New Hampshire Seacoast was back in Market Square at 3:00 p.m. on Sunday, June 27th. With extremist legislators in Concord and Washington, D.C. attempting to restrict access to the ballot box, and the Supreme Court backing them up, Occupy turned out to show its support of the “For the People Act”—which, in essence, would legalize democracy.

Goodness gracious, as a certain disgraced former Secretary of Defense used to say, that headline lacks even the pretense of objectivity, doesn’t it?

Indeed so. And what have we gotten from the precious pretense of objectivity? The presidencies of George W. Bush and Donald J. Trump, the 2008 financial meltdown, and hundreds of thousands of covid deaths. So, let’s get on with the news.

His company, Amazon, recently said it “pays all the taxes it is required to pay.” We’re not sure if that was a defense or a taunt. ProPublica has calculated that personally Bezos pays a “true tax rate” of less than one percent. In the world of objective reporting, this is a dog biting a man.

How does a man get so rich? Why, through hard work, of course.

In this specific and spectacular case, it takes the hard work of 1,300,000 people: each individual a tiny gear in the vast machine that is Amazon, working around the clock for the ultimate purpose of jamming more money into Jeff Bezos’s bank account.

Amazon has so many workers that its Human Resources department has been automated. That may sound heartless, but it’s probably just as well. The New York Times reported recently that the company’s annual turnover of workers, is about 150 percent. Only a sociopath could stand to see so many lives being treated like disposable widgets. Besides, there’s only so much room at the top.

A former Amazon exec told the New York Times that his ex-boss “didn’t want lengthy tenure for hourly employees. Company data showed that employees became less engaged over time, and Amazon wanted people who would push to go above and beyond.

“Maybe Amazon doesn’t want to have so many people leave every year, but changing that is not the No. 1 priority, either. Amazon churns through so many employees that [Times reporter Karen Weise said she] heard numerous Amazon leaders in Seattle describe a nagging fear that the company will run out of Americans to hire.”

Before that happens, Bezos expects to ride a rocket into space. His flight is scheduled for July 20th.

In anticipation of that event, a person going by the handle Ric G started a petition—addressed to “The proletariat”—at Change.org.

“Billionaires should not exist…on earth, or in space,” it reads, “but should they decide the latter, they should stay there.”

We try to be hard-nosed about corporate efforts to weasel into our pages with marketing gimmicks. Last Saturday, though, down at the Pic ’n’ Pay, this meticulously restored 1948 Chevy rolled right past all our defenses.

Ona Judge—the African-American woman who fled enslavement by George and Martha Washington and escaped to freedom in New Hampshire—was honored on Juneteenth, Saturday, June 19th. A new historical marker was placed at Mount Vernon, the plantation owned and operated by her enslavers, America’s first First Couple.

The day’s schedule included remarks by Dr. Erica Armstrong Dunbar, author of Never Caught: The Washingtons’ Relentless Pursuit of Their Runaway Slave, Ona Judge. Judge’s story was nominated for recognition by the students of a local fifth grade class, who are expected to attend the ceremony, according to a press release from the Fairfax County Department of Public Affairs. The release includes the following account of Judge’s life.

“According to the Fred W. Smith National Library for the Study of George Washington at Mount Vernon, Ona Judge, often called Oney by the Washingtons, was born at Mount Vernon in around 1774. She was the daughter of Betty, an enslaved seamstress living on Mansion House Farm, and Andrew Judge, a white English tailor whom Washington had hired. She fled the Washington home in Philadelphia in 1796 as they prepared to return to Virginia, eventually making her way to New Hampshire. She went on to marry and start a family, evading several attempts to recapture her over the years.”

Pennsylvania’s slavery laws were complicated. One gave the enslaved their freedom after six months of residency in the state. Washington went to considerable lengths to evade that law, but he was never charged or prosecuted. Some things never change.

We were deeply saddened to learn of the recent death of the writer Susan Bruce. Her Twitter handle, “@Susanthe,” was likely a play on an old Scottish naming custom, i.e., “Robert the Bruce.” If so, it’s fitting—both were daunting foes to any who dared oppose them.

Last August Carla Gericke, President Emeritus of the Free State Project, threatened to sue us for an item on page eight, linking the FSP with Carl Drega. Susan Bruce allowed us to print, as our response, her article “Carl Drega, Folk Hero to Free Staters.”

We had hoped to publish more of her work. Carpe diem, people.