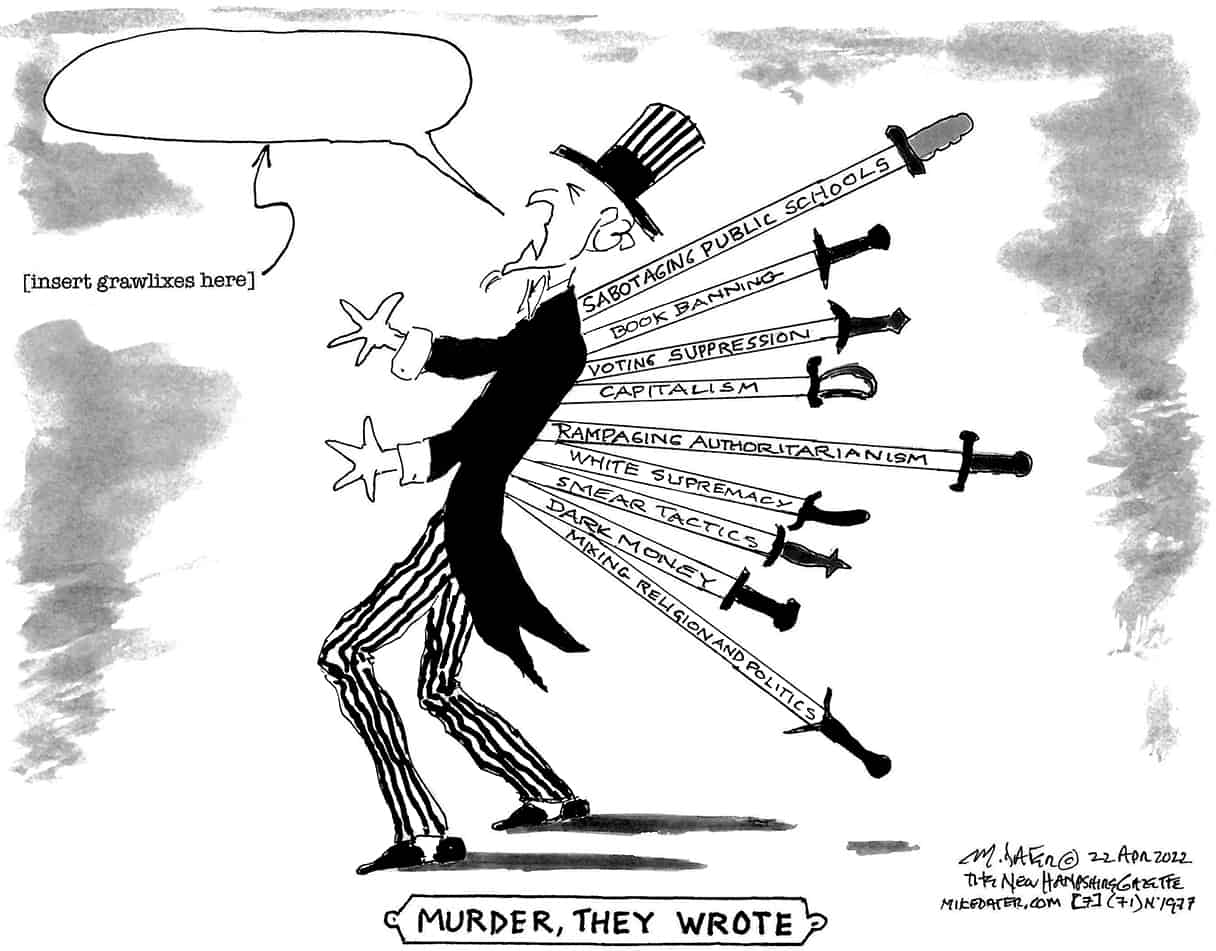 Some might say it’s offensive to depict the revered personification of our great nation being stabbed in the back. Most likely to voice that objection, we’d wager, would be those who wielded the blades to begin with. If they were to be honest—some imagination is required here—these people would say that the old buzzard has outlived his usefulness.

God knows there’s a certain cohort of people in this country—we’d use the term “class,” but that’s verboten—who have worked Uncle Sam like a rented mule. Their next move will be to take him out behind the barn and shoot him. Then, when the owner comes ’round looking, they’ll feign innocence and ask, “What mule are you talking about?”

Before we go much further we should make it plain exactly who we’re accusing—as if you did not know already. We’ll go ahead anyway because we’ve got a few knives of our own, and we need to make room to fit them all in.

To get properly started we need to go back to the Civil War. That’s the one that was started by a few rich white people in order to preserve what they claimed was their right to profit from the brutal enslavement of millions of Black people. Hard to believe now, but once upon a time, that premise actually got lots of traction. It took a lot of doing but eventually the pro-slavery crowd laid down their guns and quit shooting. Unfortunately a lot of them never got their minds right about what had just happened.

An Unfortunate But Necessary Aside

Since that time we’ve had a two-party political system. That’s just the way it is. It doesn’t have to be that way. All we’d have to do to have more viable parties would be to quit awarding elections to whichever yahoo gets one vote more than whoever comes in second. Switching to ranked-choice voting would fix that problem and give other parties a fighting chance.

There’s a catch, though. Call it Catch 23: before we could make make such a salubrious change, our broken system would have to miraculously start working. So, until further notice we are stuck right where we are.

One might think that in a country playing host to two non-stop parties, it shouldn’t be so damn hard to have a little fun. But, one would be wrong, so very wrong.

As anyone paying attention knows by now, adherents to these parties are sorted regionally. Those who are so fortunate as to earn a living by writing tend to attribute this sorting to people’s inexplicable tastes. That facile assessment seems to assume that opportunities for mobility abound everywhere. We suspect it’s just as likely that limited opportunities create hard-bitten politics.

Republicans’ lack of interest in governing stems from their fundamental opposition to the concept. In their view, the only legitimate role for government is to protect their personal property and defend The Market™ from its victims. Eventually, of course, even the cops should be privatized; their salaries would be paid by the people they arrest.

Less than twelve years after defeating the Slavocracy, the Party of Lincoln went from siding with the angels to worshipping Mammon. In exchange for the Presidency, Republicans abandoned Reconstruction. A capitalized and industrialized nation, now at peace, was a wonderful and lucrative place to be a servant of the people.

The formerly enslaved, no longer protected by Federal troops, were left to the tender mercies of the Democrats. The South went into suspended animation, dreaming of the good old days and acting very much as if they were still going on.

Life was probably better for the average American than for a serf in the Russian Empire. Most lived on farms and were acclimated to unrelenting toil, but at least they didn’t have to fear the knout. Factory workers, many of them children, routinely put in hours that would fell a modern American.

Neither party displayed much interest in improving anyone’s lot. Why would anyone want to make changes? For a man with enough capital to hire a critical mass of legislators, the era of the robber barons was a great time to be alive.

In the late 19th century, fed-up Progressives began injecting some new ideas into politics. Some watered-down versions eventually made it into law. Ironically, it took the 1929 Crash to set things on a course towards what could be called Prosperity for Most. The depression that followed gave workers a choice: organize or starve.

Organize they did. Bosses discovered that they couldn’t exploit labor that workers refused to provide. The bosses fought back, metaphorically and literally. They hired goons and mobsters to break picket lines and usher scabs into factories, beating, clubbing, and shooting strikers in the process. Strange, how a nation full of nostalgia junkies so rarely recalls those days.

By the end of the Thirties it was finally established that workers had the right to organize. Another war disrupted things for a while, but once certain fascists had been dealt with it became quite clear: things were now very different. For white people, anyway. What followed were two pretty good decades in a row. Houses, cars, college educations—a prosperous middle class.

Certain people, of whom we spoke earlier, saw this as a catastrophe: an ever-increasing share of the GDP was going to plebians who worked for a living. Shockingly, this wasteful profligacy was being conducted under the protection of the Federal government.

The solution to that problem is obvious: sentence Uncle Sam to the Death by a Thousand Cuts. Let The Market™ provide whatever the people need—for a price, of course.

The solution to that solution is the same as it ever was: organize.