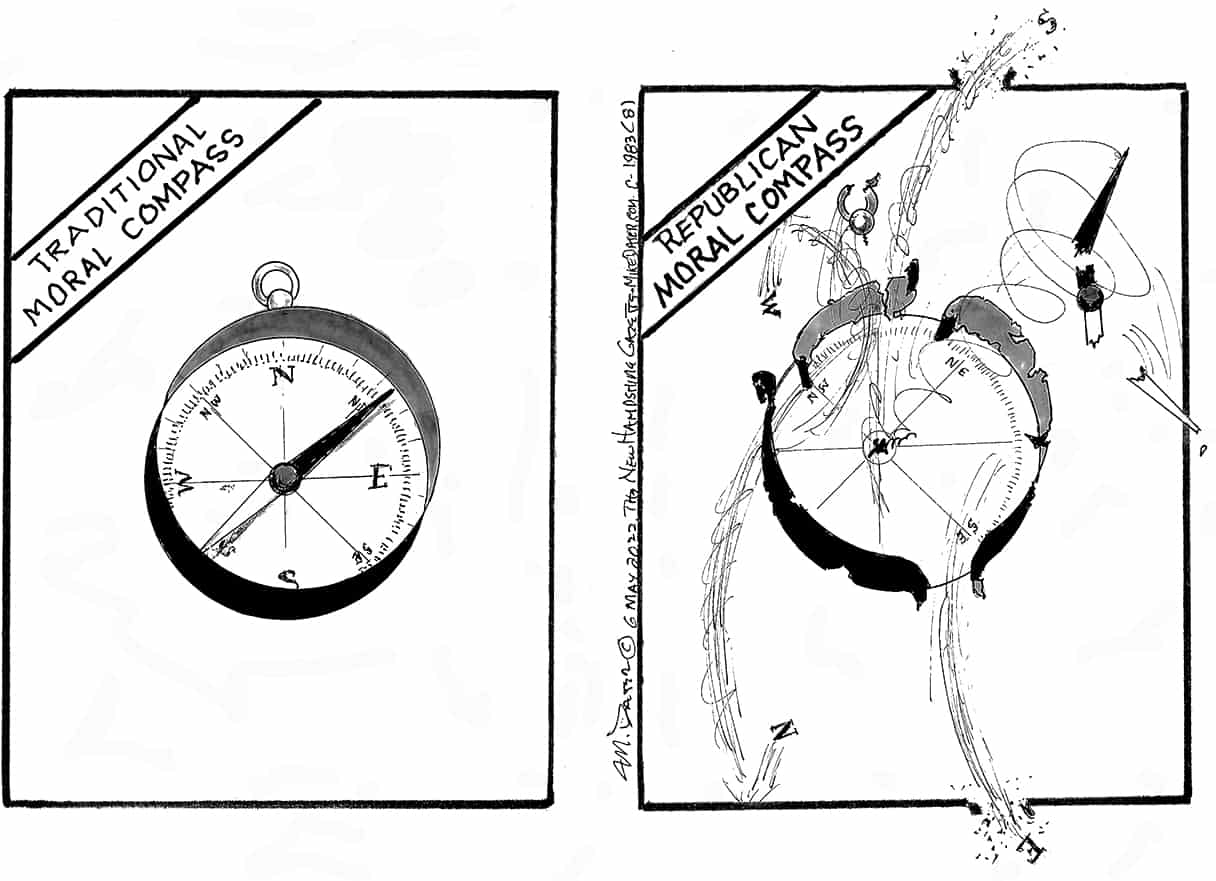 The Union Leader* revealed on Sunday that its former publisher William Loeb sexually abused his daughter and his step-daughter. Ordinarily we try to avoid clichés, but this is a special occasion: yes, we are shocked, but no, we are not surprised.

Readers under a certain age may not appreciate the magnitude of this revelation. In recent decades the statewide daily has been but a shadow of its former self. For more than thirty years, though, beginning in 1946, the Union Leader was New Hampshire’s Pravda and Bill Loeb was its Stalin. His vitriolic editorials ran on the front page, thundering against anyone who dared to deviate from his party line. Democratic politicians could perhaps afford to criticize Loeb, but few of them had any power. Republicans generally held their tongues.

For a sense of his journalistic style, let us turn to a 1971 profile of Loeb in the New York Times. The following message, addressed to those taking part in the Moratorium To End The War In Vietnam, ran across the top of the front page on October 15, 1969, much of it in lurid red ink:

For the record, the hyper-patriotic Loeb was also a chickenhawk. He dodged the draft for WW II—the “Good” War—by aggravating a supposed ulcer with copious amounts of alcohol. His cowardice did not reflect, though, any principled objection to violence. He reportedly once shot the office cat with a semi-automatic pistol habitually kept on his person.

Loeb lifted the paper’s motto from Daniel Webster: “There is nothing so powerful as truth.” It’s a partial quote, actually. Webster went on to say, “…and often nothing so strange.” The only thing stranger than Loeb himself—see Kevin Cash’s 1975 biography, Who the Hell IS William Loeb? for that—is how such a monster could dominate this state for so long.

Because, to a large extent, he still does. When Governor Chris Sununu jabbers on about “The New Hampshire Advantage,” he’s referring primarily to our regressive tax structure. It was set in stone—granite, of course—by Loeb and his crony, Governor Meldrim Thomson: no broad-based taxes, period, and especially no income tax. Obviously any putative advantage goes solely to the wealthy.

Now, like the name of some discredited pharaoh being chiseled into oblivion, Loeb’s name has been stripped from the Union Leader’s masthead.†

Sunday’s Union Leader bombshell triggered in us a case of déjà vu.

In May, 2001, the Union Leader’s then-publisher Joe McQuaid ran his second-best piece of journalism ever,‡ blowing the whistle on his own father, Union Leader editor B.J. McQuaid; his grandfather, Commissioner of Motor Vehicles John F. Griffin; and U.S. Senator Styles Bridges—said to have been the most powerful political figure ever to represent New Hampshire in Washington, D.C.

“Dead End,” ran the first big headline, “Whose car killed Della Call in 1936? Rumors point to high places in Concord.” The short version is this: Bridges, the Governor of New Hampshire and Senator-elect, was at the wheel of a car on November 12, 1936 when Della Call was killed and another woman was injured in a hit-and-run accident in Chichester. Griffin and McQuaid helped cover up the crime.

For those who scoff at “conspiracy theories,” here’s the math: this one involved dozens of people, kept the truth hidden for 65 years, and was not exposed until all the guilty parties were long dead.

Not that exposure matters all that much when you’re a right wing muckety-muck with the stature of Loeb or Bridges. McQuaid’s 2001 article was promptly forgotten. If not for our file copy, retrieved from the New Hampshire Historical Society, we’d wonder if we imagined the whole thing.

Eleven years later there was some talk about stripping Bridges’ name from a stretch of I-95 and the New Hampshire Governor’s mansion. It was spurred by a 2012 New Yorker article which briefly noted that Bridges, an ally of Joe McCarthy, had blackmailed Senator Lester Hunt [D-Wyo.]. Retire, Bridges said, or you’ll see your son’s arrest for homosexual behavior written up in the papers. Hunt shot himself in his Senate office.

To this day, though, Bridges’ name remains on the highway, and on the Governor’s mansion—which, in another ignored scandal, he almost certainly bought with under-the-table cash from the China Lobby.

Modern-day conservatism is remarkably paradoxical. While it claims to be clear-cut, straightforward, and unbending, in fact it turns out to be as flexible as a sideshow gymnast.

So what if the public supports abortion rights by a margin of two to one? Forget all that blather you heard about “settled law” at confirmation hearings. Five Supreme Court justices—all appointed by presidents who lost the popular vote—have decided the people are wrong. They’re ready to throw out Roe v. Wade.

The law also requires minors made pregnant through incest to notify a parent or guardian before getting an abortion.

* Once a week, to be even more annoying, the Union Leader calls itself the New Hampshire Sunday News. Having gone to the trouble of pointing this out, we’ll ignore this classic distinction without a difference and refer to both papers as the Union Leader—despite the fact that both these exposés originally appeared on Sundays.

† We denounce this cowardly, ahistoric—indeed, Stalinistic—maneuver. Should we remove the name of Daniel Fowle, our Founder, from our masthead for his enslavement of Primus X? Only by confronting the past honestly can we hope to move forward.

‡ The best was an editorial published May 14, 2015, which read, in its entirety, “Frank Guinta is a damned liar.”