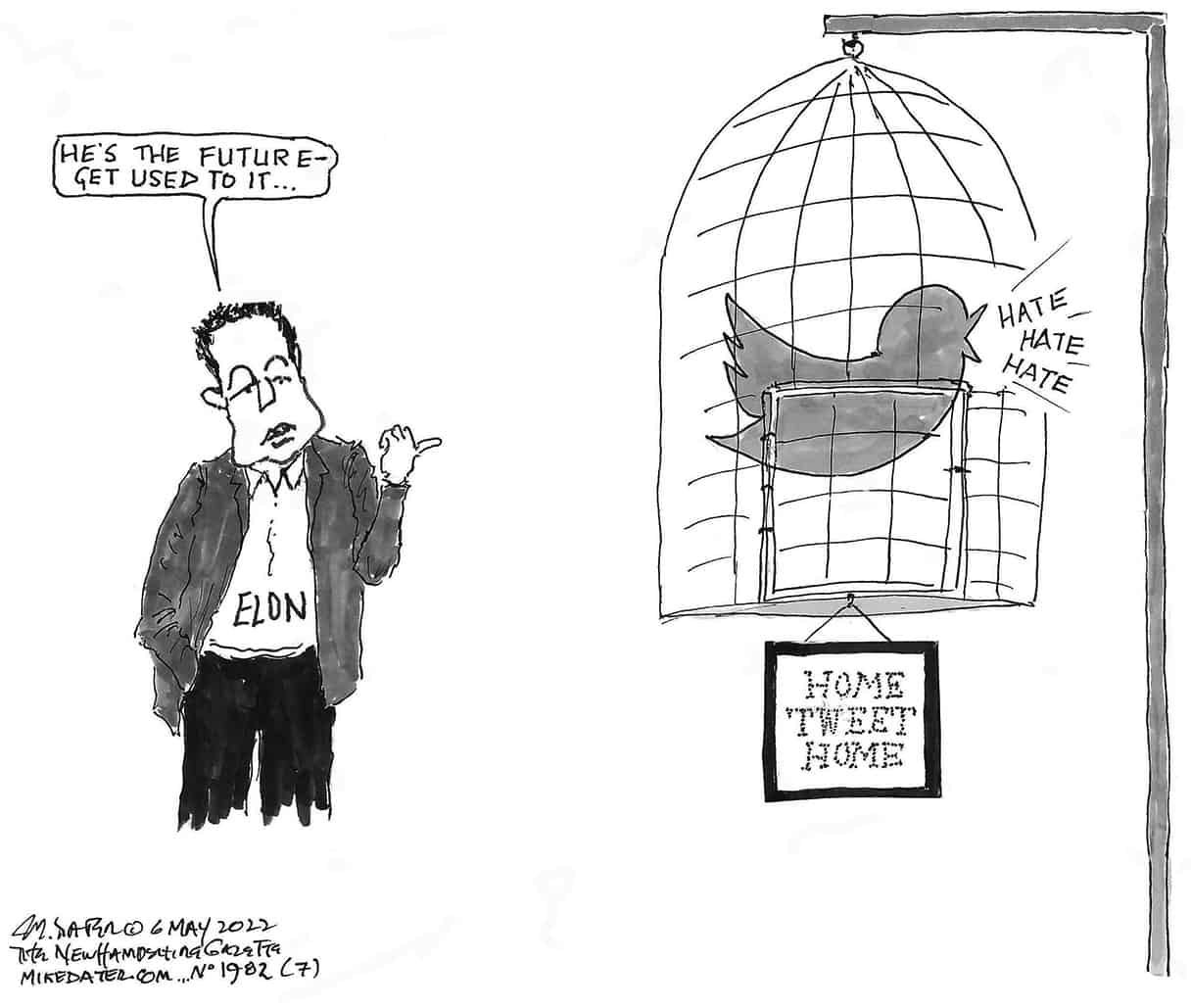 Well—we sure are glad that’s finally over.

The Covid-19 pandemic, a once-in-a-century pain in the butt, has finally ended. Everyone is free to roam around, inhaling and exhaling at will. Within the next fortnight the acknowledged U.S. death toll is going to top one million, but never mind all that depressing stuff—it’s morning in America, again!

At least, so it seems. New Hampshire closed its testing clinics in March, just as winter was beginning to let up. Portsmouth’s iconic brick sidewalks are clogged with tourists from all over hell and gone. Some of them fly here, spending hours in a metal tube, sharing the air, unmasked, with who knows who.

There used to be a CDC mandate requiring air travelers to mask up. Certain individuals, though, decided that masks were the perfect litmus test for our never-ending culture war.

Last month Katherine Mizelle—the youngest Federal judge on the bench, appointed by a traitor and confirmed by a lame duck Senate despite a “not qualified” rating from the American Bar Association—overruled the CDC and threw out the mandate.

The CDC was empowered in 1944 to issue regulations regarding “sanitation” in order to combat infectuous diseases. Mizelle decided that the law’s wording restricted the CDC’s authority to “measures that clean something.”

No, it just prevents the air inside the conveyance from becoming contaminated with a potentially-fatal virus, that’s all.

For a more learned rebuttal of Mizelle’s rash ruling, let us turn to Steven Lubet, a Professor of Law at Northwestern, who dissected the flimsiness of Mizelle’s argument in The Hill.

“[Mizelle] cited the 1948 Funk & Wagnall’s Dictionary (‘the removal and neutralization of elements injurious to health’) and the 1942 Webster’s New International Dictionary (‘rendering sanitary’), declaring that she had to choose one or the other.

“In fact, Mizelle strategically skipped even likelier, more comprehensive definitions from the very sources she cited. The full definition in the 1942 Webster’s Dictionary is ‘a rendering sanitary; science of sanitary conditions; use of sanitary measures,’ with no restriction to cleaning.”

Blatant dishonesty? Or mere incompetence? Alas, that’s the perennial question of our era.

No matter, though. By the time the courts knock down Mizelle’s ruling, the latest Covid variant will have had plenty of time to knock down a few thousand more hapless Americans.

By the way, did we mention—not that it’s at all relevant—that Katherine Mizelle’s husband is Chad Mizelle, formerly an assistant counsel to Dolt #45, and since January an employee at Affinity Partners?

Affinity is Jared Kushner’s “investment firm,” which recently landed $2 billion from the Saudis.

Affinity for what? Bone saws and dirty money, one supposes.

As everyone knows, or used to know, Montpelier is the name of the grand Virginia estate which was once the home of James Madison. Civics currently being in such a parlous state, we’ll note as well that Madison was the Fourth President of these States which, out of sheer momentum, we still insist on calling United.

Montpelier was a plantation, an agricultural enterprise operating according to the market principles in effect at that time—which is to say, nearly all the hard work was done by people who were enslaved. It’s estimated that between five and seven generations were held in bondage by the Madisons at Montpelier, about 100 at any given time.

Montpelier’s last private owner was Marion duPont Scott, great-granddaughter of the gunpowder tycoon Eleuthère Irénée du Pont. It now belongs to the National Trust for Historic Preservation, and is managed by a Board of Directors.

Last June the Board announced that it would “share authority equally with descendants of people who were once enslaved there,” as the Washington Post put it.

In late March, though, the Board reneged, rewriting its bylaws to take away the ability of the Montpelier Descendants Committee [MDC] to name members to the Board.

According to a March 25th article in the Washington Post, a “majority of the site’s roughly 40 full-time employees wrote an unsigned resolution urging the board not to approve the change….

“The employees supplied their names to The Washington Post but most asked that they not be published for fear of retaliation.”

At that time the National Trust “wrote [Board chair Gene] Hickok,” according to the Post, “and urged him ‘in the strongest possible terms’ not to go ahead with changing the bylaws.” Last Thursday the Trust went further, releasing a statement supporting the “esteemed slate of recommended nominees” of the MDC.

In a rare instance of racial justice apparently prevailing, the Board announced on Monday that it would “approve the new MDC candidates at its May 16 meeting,” according to the Orange County [Virginia] Review.

Who Bankrolled Ginni Thomas as She Sought to Overthrow the 2020 Presidential Election?

On Tuesday of this week, Senator Sheldon Whitehouse (D-R.I.) is chairing a subcommittee hearing for the U.S. Senate Judiciary Committee on judicial ethics and transparency. This interrogation of the outside forces undermining the fairness of the U.S. Supreme Court is sorely needed. Respect for the Supreme Court has nose-dived, according to a 2022 Pew poll, with the share of Americans who see the Court in a favorable light reaching the lowest level in nearly four decades. Just 16 percent of Americans surveyed believe the justices do a good job keeping politics out of their decision-making.

The extremism and extreme partisanship of the right-wing faction dominating the Court has been laid bare by the cases they hand-picked out of thousands to rule on this term, which may result in radically reactionary edicts that overturn Roe v. Wade, gut the EPA, and push religion further into public schools. Such declarations by the Court that Donald Trump packed with the help of dark money would be starkly at odds with long-standing legal precedents and the views of most Americans.

One component of the way dark money continues to pervert the Court occurred just last month.

Just one day later, the Washington Post and CBS broke the news that Thomas’s wife, Ginni, had repeatedly texted Trump’s Chief of Staff, Mark Meadows, to overturn the 2020 presidential election. She even told Meadows which lawyer should lead the fight, namely conspiracy theorist Sidney Powell.

As public outcry over the actions of the spouse of a Supreme Court justice was about to explode, the ad was unveiled, polishing her husband’s image. That’s crisis management 101, and it amounts to a massive gift to the Thomases.

The front group behind the ad calls itself the Judicial Crisis Network (JCN), but who wrote the check?

JCN is no impartial party. It’s the signature group of the Thomases’ long-time ally, Leonard Leo, who sits at the center of a court capture network that spent millions in dark money to put three new allies for Clarence Thomas on the Court: Justices Coney Barrett, Kavanaugh, and Gorsuch.

In 2019, the Washington Post reported Leo had raised $250 million since 2014, which True North Research updated to nearly $600 million, not including recent funds raised to oppose Judge Jackson.

Ginni praised Leo when she gave him an award she created a few years ago:

“I also love…Leonard Leo. [He] has single-handedly changed the face of the judiciary under the auspices of…the Federalist Society…He has many hats, that isn’t even all he does. He doesn’t really tell all that he does, but I know enough to know the man is a force of nature.”

Like Leo, Ginni Thomas also wears many hats. As journalist Jane Mayer detailed in The New Yorker, Ginni has been in the thick of highly political activities, including paid consulting for FedUp PAC, backing Roy Moore’s 2017 Senate bid, and Frank Gaffney’s anti-Muslim group, Center for Security Policy, which has participated in Supreme Court litigation from which Justice Thomas did not recuse himself.

With each new revelation, new questions arise. Who was paying Thomas’s consulting fees when she sought to install people who fit her political agenda—and purge those who did not—in the White House?

Did Thomas receive any consulting payments while she demanded the White House stop counting Americans’ votes in exchanges with Meadows in November 2020. Was she acting on behalf of a client or in concert with other groups or funders?

Notably, weeks of communications between Ginni and Meadows remain missing. We do know she promoted and attended the event on the Mall that launched the bloody insurrection, but we are entirely in the dark about who was paying Thomas at the time.

Nor do we have any understanding of who Thomas was working for when her husband was the sole Justice to vote against ordering Trump to disclose White House materials related to January 6th to Congress—materials that include communications by his wife.

The financial disclosure filed by Justice Thomas does not reveal how much Ginni was paid in recent years, let alone the identities of her biggest clients or their funders. That’s outrageous and demonstrates that disclosure rules must be reformed.

We the People have a moral right to know who is feathering the nest of a Justice sitting in judgment of cases that reach the Supreme Court. We have a right to know if they have cases before the Court or are funding groups trying to reverse legal precedents and people’s rights.

The American people also have a right to know who bankrolled the PR campaign to promote Justice Thomas as the controversy over Ginni’s activities became public.

From the little that we know already, however, one thing is clear: Justice Thomas should resign; his wife sought to subvert our very democracy.

If he does not, Chief Justice John Roberts should insist that Thomas retire—immediately—rather than let this corruption continue to tar the Court.

The House should initiate Thomas’ impeachment. The January 6th Committee should hold Ginni Thomas to account if she refuses to turn over the complete records.

Finally, Congress must pass the DISCLOSE Act and AMICUS Act, as Senators Whitehouse, Bloom, and others have implored, in order to prevent something like this from ever happening again.

Americans deserve a fair and honest Supreme Court, above reproach and devoted to the highest standard of ethics—rather than the lowest of the low with Clarence Thomas on the bench.

Lisa Graves is executive director of True North Research. Previously, she was Deputy Assistant Attorney General at the U.S. Department of Justice in the Office of Legal Policy/Policy Development and served as Chief Counsel for Nominations for the U.S. Senate Judiciary Committee for Senator Patrick Leahy. This work is licensed under Creative Commons (CC BY-NC-ND 3.0). Feel free to republish and share widely.

It has now been 23 years since we resumed regularly-scheduled publication, here in the town of our founding. Consulting TimeAndDate.com, we see that from Saturday, May 1, 1999 to today is 1201 weeks. That odd number is the result of a hiccup back in the mid-oughts: a hard drive failed just a day or two before our press deadline; that edition ate up three weeks instead of two.

Rounding down to 1,200 weeks would make this our 600th consecutive more-or-less regularly scheduled issue under the current alleged management.

But—26 issues a year x 23 years only comes up with 598. Frankly we’re baffled, but of this we are sure: we are forever indebted to the stalwart volunteers, past and present, whose names have graced our masthead. We are likewise grateful to our advertisers—bold enough to link their fortunes, such as they are, with ours. And, last but never least, we extend our thanks to our readers, without whom we are nothing.