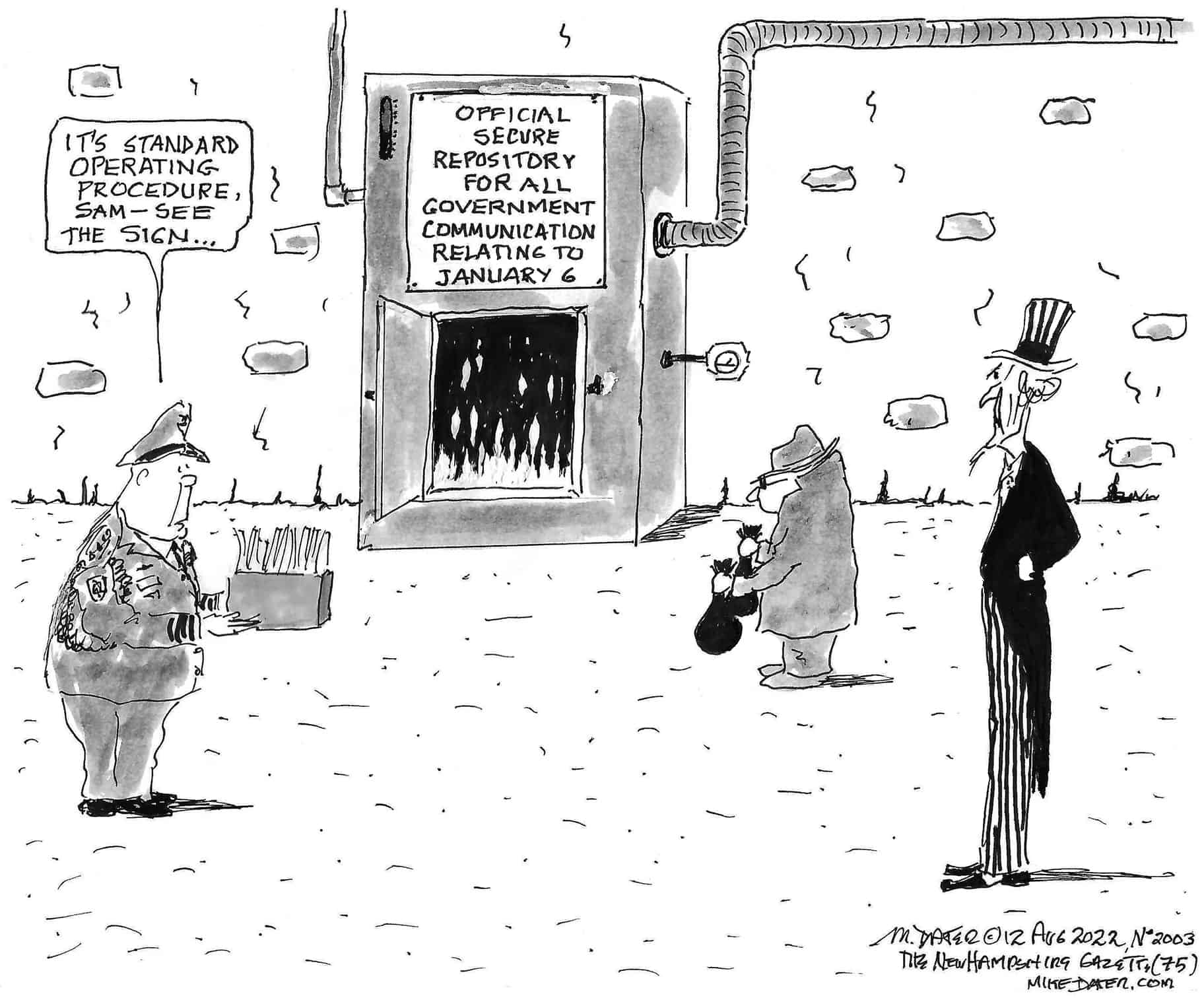 Monday evening The Former Guy released a statement which began, “These are dark times for our nation, as my beautiful home, Mar-A-Lago in Palm Beach, Florida, is currently under siege, raided, and occupied by a large group of FBI agents. Nothing like this has ever happened to a President of the United States before.”

This unexpected signal that the Justice Department may eventually bring the law to bear on the individual in question sent a tidal wave of schadenfreude across Blue America.

Coming, as it did, amid what had been an apparent drought of consequences, the wounded, self-pitying tone of the statement—“They even broke into my safe!”—made it all the more exquisite.

So much for conventional wisdom, which generally assumes that the first workday of the week will invariably be tedious.

Textual analysis suggests that The Former Guy [TFG] composed the message himself. No one runs on a sentence like he does: “It is prosecutorial misconduct, the weaponization of the Justice System, and an attack by Radical Left Democrats who desperately don’t want me to run for President in 2024, especially based on recent polls, and who will likewise do anything to stop Republicans and Conservatives in the upcoming Midterm Elections.”

The person who approved the search warrant was far from being some “Radical Left Democrat.” Christopher Wray is a lifelong Republican. When TFG made him the Director of the FBI, he boasted of his nominee’s “impeccable credentials.”

According to Newton’s Third Law of Motion, “For every action, there is an equal and opposite reaction.” It’s a shame that doesn’t apply to politics. In post-Gingrich America, for every lawful action by law enforcement against a Republican, there is an asymmetrical over-reaction which can best be measured using the Richter earthquake scale.

Given the extent of this entire sprawling enterprise—the Trump Organization, the Trump administration, the co-opted Republican Party, the sold-out, signed-on think tanks, the random loose-cannon political grifters—it would be easy to get lost sifting through details.

One notable reaction, though, is that Fox News, which had been subtly distancing itself from TFG, suddenly reverted to full-on Trumpism. Harris Faulkner gave a particularly fine simulacrum of affronted dignity as she expressed her indignation at the mere thought that the Justice Department would actually have the nerve to enforce the law.

The far-right in the United States responded ominously to the FBI’s Monday search of former President Donald Trump’s Florida mansion, with Republican lawmakers and television personalities baselessly accusing the Biden administration of weaponizing the Justice Department and popular as well as anonymous social media users beating the drums of a civil war.

“Lock and load,” says the top comment related to the Mar-a-Lago search on patriots.win—a pro-Trump comment forum that emerged after Reddit banned the r/The_Donald group of nearly 800,000 for repeatedly posting racist and misogynistic content in violation of its rules against harassment and targeting.

When one user asks, “Are we not in a cold civil war at this point?” another suggests that violence is imminent, with “authentic pain” coming soon.

According to NBC News reporter Ben Collins, the content shared on pro-Trump forums Monday night was arguably even more violent than what was posted in the lead-up to the deadly January 6, 2021 attack.

As he did before last year’s insurrection at the Capitol, Trump only has “to ask us,” notes one commenter. Another writes: “None of this demonstrating in the snow shit. Summertime was made for killing fields.”

Fox News hosts and guests, meanwhile, quickly disparaged the Mar-a-Lago search as a “partisan witch hunt,” “dark day for our republic,” “preemptive coup,” “Third World bullshit,” and the work of the “Gestapo” and “Stasi,” as documented by Media Matters for America.

The right-wing outrage machine was adopting talking points that Trump laid out in a statement portraying himself as the victim of “prosecutorial misconduct, the weaponization of the justice system, and an attack by radical left Democrats who desperately don’t want me to run for president.”

“Such an assault could only take place in broken, third world countries. Sadly, America has now become one of those countries, corrupt at a level not seen before,” said Trump. “The lawlessness, political persecution, and witch hunt must be exposed and stopped.”

“We don’t yet know much about what was in the search warrant used to raid Donald Trump’s residence at Mar-a-Lago on Monday. We do know that the raid concerned the removal of classified documents from the White House and that, according to Trump, agents raided his safe.

“But we also quickly found out that a lot of influential people are rather uninterested in any of that, reflexively shouting “witch hunt” and baselessly blaming President [Joe] Biden for the raid in a way that bodes very poorly for whatever comes next in this process. Trump has marshaled his army of supporters to declare, in knee-jerk fashion, any legal scrutiny of him a deep-state operation.”

Sen. Marco Rubio (R-Fla.) endorsed Trump’s unsubstantiated claim that the Biden White House is “using government power to persecute political opponents,” calling it “something we have seen many times” from authoritarian regimes in impoverished nations “but never before in America.” The House Judiciary Committee’s Republicans, led by Rep. Jim Jordan (Ohio), echoed that message.

As Media Matters senior fellow Matthew Gertz explained, the Justice Department is not yet able to provide details given the ongoing nature of investigations into Trump’s attempt to overthrow the U.S. government and other possible crimes, so the ex-president and his allies are “filling that vacuum” with baseless allegations of political malfeasance.

House Minority Leader Kevin McCarthy (R-Calif.) said in a statement that “when Republicans take back the House, we will conduct immediate oversight of this department, follow the facts, and leave no stone unturned,” telling Garland: “Preserve your documents and clear your calendar.”

Despite the fact that Garland hasn’t yet publicly responded to the GOP’s planned inquiry, McCarthy concluded that “the Department of Justice has reached an intolerable state of weaponized politicization” while Republican National Committee chair Ronna McDaniel declared that “Democrats continually weaponize the bureaucracy against Republicans.”

As the Post noted: “That’s a lot of firm conclusions based on not much at all. But it’s the fruit of years of Trump claiming persecution.”

“This investigation hardly comes out of nowhere: Trump’s handling of government documents has long been a focal point. The Washington Post reported as far back as February on Trump’s ‘relentless document destruction habits.’ A couple of days later, the National Archives confirmed that it had retrieved 15 boxes of documents from Mar-a-Lago—including records marked as ‘classified’ and even ‘top secret’—that should have been turned over, and then asked the Justice Department to investigate, which it clearly has.

“The question from there is whether this is a matter that merits a search warrant. That the Justice Department would go this route would seem to suggest it sees something potentially incriminating beyond merely shoddy record-keeping and document retention. The department knows this decision will be harshly scrutinized; going down this path only for its destination to be a minor finding, ending in a slap on the wrist, isn’t worth the blowback it’ll get from 40 to 45 percent of the country.”

Ironically, the Post added, Trump’s supporters were “once quite consumed with the import of document security by would-be presidential candidates—and quite happy to promote the idea that their preferred candidate ought to ‘lock’ such an opponent ‘up.’”

Trump also tried to use his power as president to harm his political rivals, repeatedly asking Ukraine’s president to investigate Hunter Biden. And although Clinton’s home wasn’t searched, the FBI did conduct a public probe of her use of a private email server in 2016—possibly contributing to her failure to win the White House that year.

Cambridge, Massachusetts-based Moderna reported $4.7 billion in second-quarter sales—a nine percent increase over the same period last year—despite taking a nearly half-billion-dollar hit for write-downs on expired or soon-to-expire vaccine doses. Nearly all of the company’s revenue came from sales of its Covid-19 vaccine, its only product on the market—and one whose development was funded entirely by U.S. taxpayers and contributions from private donors.

CNBC reports Moderna is also sitting atop an $18 billion cash pile, and intends to buy back $3 billion worth of its own stock. Furthermore, the company last week announced a $1.74 billion agreement with the U.S. government to supply up to 300 million doses of an updated Covid-19 vaccine for use against the omicron BA.4 and BA.5 subvariants.

“Moderna’s Covid-19 vaccine was developed totally by public funding. Yet the company has been allowed to make huge profits while doing next to nothing to ensure equitable access for people in lower-income countries,” Mohga Kamal-Yanni, policy co-lead for the People’s Vaccine Alliance, said Wednesday. “For the company’s newly created billionaires, this pandemic has been a lucrative smash-and-grab operation.”

Moderna has been widely criticized for selling its vaccines mostly to wealthier countries, even as billions of people in the Global South lack access to the lifesaving inoculations over two and a half years into the pandemic. The company has also come under fire for massively overcharging for its vaccine doses.

Like other pharmaceutical companies and almost all wealthy nations, Moderna long opposed a waiver for parts of the Agreement on Trade-Related Aspects of Intellectual Property Rights (TRIPS), a proposal by India and South Africa—supported by more than 100 nations—that would lift some patent protections to allow developing countries to produce and distribute vaccines. A narrowly crafted World Trade Organization deal ostensibly meant to address vaccine inequities was condemned as a “sham” by activists earlier this year.

“Now Moderna is threatening the world’s response to future pandemics,” Kamal-Yanni said. “Broad patents filed by the company in South Africa could derail a WHO and African Union project aimed at responding to global health crises by rolling out mRNA vaccines made in low- and middle-income countries.”

On Wednesday, the Médecins Sans Frontières (MSF) Access Campaign noted that more than 100 manufacturers in low- to middle-income countries “have been identified with potential to produce mRNA vaccines,” while urging Moderna to share its vaccine technology “for Covid and for the future.”

Alain Alsalhani, vaccines pharmacist at MSF’s Access Campaign, tweeted that “mRNA technology has important potential to beat back not just Covid but other epidemics. We should refuse to allow half of the world to get served first while the rest of the world looks on empty-handed.”

Messenger RNA vaccines—which work by instructing cells to produce recognizable copies of viral protein against which the immune system can develop antibodies—are simpler and faster to make than alternatives, and can be adapted to combat not only new Covid-19 variants but also other diseases including HIV, malaria, and tuberculosis. Moderna and others are also exploring potential mRNA monkeypox vaccines.