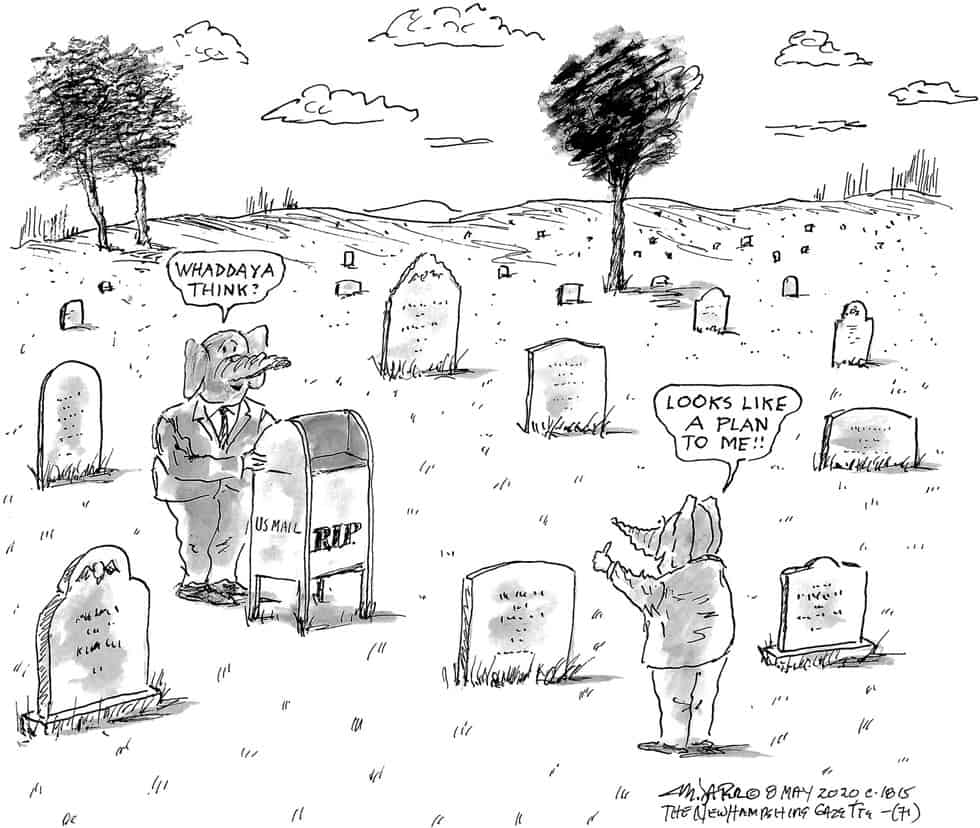 In 1878, the State Capitol in Lansing, Michigan was an unpreposessing, two-story wooden building topped by a tin cupola. It was replaced the next year by a colonnaded stone structure, the dome of which soars to an imposing 267 feet. It’s a good thing, too. Otherwise the dozens of gun-toting, camo-wearing protestors who mobbed the place last week would have looked pretty silly, cramming into that run-down old barn, acting like they were about to liberate Venezuela.

Their stated intent was to protest Governor Gretchen Whitmer’s stay-at-home order, which they call tyrannical. In addition to semi-automatic weapons, some carried Confederate flags, nooses, and swastikas as visual aids. The Detroit News reported that “[m]ost of the demonstrators’ signs focused on [Whitmer’s stay-at-home order] Thursday. But a few signs were more violent in tone. One attached to a truck outside the Capitol said, ‘Make treason punishable by hanging.’ Another person held a sign that said, ‘Tyrants get the rope.’”

Of local interest: one man at the Lansing protest carried a sign reading, “Live Free or Die.” Unlike the heavily-armed wannabes, he couldn’t enter the building. A story at Fox News explained why: “Michigan has allowed guns inside the Capitol building but banned protest signs several years ago.”

“Black people get executed by police for just existing, while white people dressed like militia members carrying assault weapons are allowed to threaten State Legislators and staff,” she tweeted. “Our gun laws are so broken.”

“These are very good people,” the President of the United States tweeted, perhaps recognizing them by their swastikas, “but they are angry. They want their lives back again, safely! See them, talk to them, make a deal.” Some things never change—once again, a Republican President who doesn’t bat an eye at negotiating with terrorists.

Republicans refused to pass legislation extending the lockdown, so Whitmer did it on her own by signing an Executive Order extending it until May 28th.

Color, Covid-19, and the 2nd Amendment

At last count 4,343 Michiganders had died from Covid-19. Considering the racial breakdown of those who have been afflicted nationwide, it’s virtually certain that a disproportionate number of the dead are people of color.

As the pandemic continues to spread, we can only assume that the burden will continue to bear down disproportionately.Michigan State Representative Sarah Anthony, being black, is likely aware of that burden as she goes about her duties. Thanks to Michael Lynn, Jr., though, and a couple of his associates, she may be a little bit less worried than Rep. Tlaib about all those armed protestors.

“We want to change the narrative, first of all,” Lynn told the Pulse’s Kyle Kaminski. “We want people to understand that people of color can come out here with guns just the same as anybody else can,” said the black Lansing firefighter and community activist who helped organize Anthony’s security detail.

“The majority of the protesters were white,” Anthony told the paper. “I’m still not exactly sure on the connection between Confederate flags and Nazi symbolism. They just had no connection to the stay-at-home orders.”

Although we are sustaining subscribers—as all chronic listeners should be—we no longer tune in to NHPR between 3:00 and 4:00 p.m. Whenever we try, the Governor’s on. We find his rapid, sales pitch voice as unbearable as the kvetching of the President whose daily spiel he’s clearly emulating.

Like his even more insufferable father—whose outsized role in bringing on our climatic apocalypse we outlined in our December 7, 2018 issue, in a piece we headlined, “Local Governor Wrecks Atmosphere”—Sununu Two likes to pose as a technical adept, cleverly tweaking the state’s dials to achieve an optimal response to the medical catastrophe visited upon us by the Doofus-in-Chief he has yet to renounce.

On the one hand the Governor’s modified stay-at-home order still directs citizens to stay home through May 31—but, it also reopens some nonessential businesses. According to the AARP’s website, “[o]n May 11, hair salons, barbershops and similar cosmetology businesses can reopen with restrictions. Retail stores can also reopen May 11 but must limit the number of customers inside and implement other precautions. On May 18, restaurants can offer outside dining, but tables must be six feet apart among other measures that must be implemented.”

OK, then: certain rituals have been prescribed to placate the angry, invisible god Covid. How about diagnostic testing? Any progress on the actual, you know…scientific front?

NPR.org has a handy web page comparing three essential stats for all of the states…[rapid clicking noises].

It says here, “Harvard’s Global Health Institute estimated minimum targets for how much testing each state needs by May 15th to contain its outbreak through a strategy of testing, tracing and isolating positive cases and their contacts. Death rates are provided as a marker of outbreak size. A positive test ratio of 10 percent or less is the target advised by the World Health Organization. States with higher ratios may not be testing enough, or testing a diverse enough pool of people.”

In terms of deaths per 100,000, New Hampshire is in a five-way tie for 24th place, in a race where the winner comes in last. That doesn’t seem too shabby until you recall that most of those deaths are concentrated in one kind of place: the virus is ripping through nursing homes like the Reaper on roller skates.

Our positive test ratio of nine percent meets the WHO’s target, so there’s two out of three; that ain’t bad, we’ve met the Meatloaf ratio.

Finally, are we testing enough? No. Not even close. At 998 tests per day, that’s less than half the number recommended by the WHO.

That’s OK though, says the Governor, you can go get your hair cut.

We’d rather trust the judgment of Portsmouth’s Health Officer, Kim McNamara. She told the City Council on Monday, according to the Corporate-Owned Local Daily, that “there is more COVID-19 virus currently circulating than when Gov. Chris Sununu’s stay-at-home order was issued in March.”

The U.S. Postal Service’s Board of Governors—which is controlled by appointees of President Donald Trump—announced late Wednesday that it has unanimously selected a top Trump and GOP donor to serve as Postmaster General, installing an ally of the White House to lead a popular agency that has long been a target of right-wing reforms and is currently under severe threat of collapse due to the Covid-19 crisis.

In a statement, the Board of Governors touted Louis DeJoy’s experience as “an accomplished business executive” in North Carolina. As the Washington Post reported, DeJoy—the head of fundraising for the Republican National Convention in Charlotte—is set to become the “first Postmaster General in two decades who did not rise through the agency’s ranks.”

DeJoy is expected to take over as postmaster general on June 15th, following the retirement of current U.S.P.S. chief Megan Brennan.

Rep. Gerry Connolly (D-Va.), a vocal critic of the president’s recent attacks on the U.S.P.S. and refusal to provide the agency with desperately needed aid, slammed the selection of an executive and GOP donor with no experience working at the Postal Service, particularly at such a perilous moment for the nation’s most popular government institution.

“President Trump rewards a partisan donor by installing him at the United States Postal Service,” Connolly said in a statement. “The Postal Service is in crisis and needs real leadership and someone with knowledge of the issues. This crony doesn’t cut it.”

DeJoy’s appointment comes as the Postal Service is struggling to weather the sharp decline in mail volume brought on by the Covid-19 pandemic. The agency’s recent financial troubles have been compounded by a 2006 congressional mandate requiring it to fund its retirees’ health benefits through 2056.

Last month, Postmaster General Brennan told members of Congress that U.S.P.S.—which has not received federal funding for decades, running entirely on revenue from products and services—needs an infusion of $75 billion to avert financial ruin within the next several months. House Democratic leaders are reportedly pushing for $25 billion in emergency funding for the Postal Service in the next Covid-19 stimulus package.

But Trump continues to stand in the way of aid for U.S.P.S.—dismissing the agency as a “joke”—and threaten to block legislation that includes any direct funding. The CARES Act, which Trump signed into law in March, contained a $10 billion loan for the Postal Service—funding that the Trump administration is reportedly holding hostage in an effort to impose long-sought changes to the agency.

“At a time when the country needs us now more than ever, [Treasury Secretary Steve] Mnuchin and his Wall Street cronies are attempting to exploit the crisis to raise prices, demonize heroic postal workers, and cut service, all so private delivery companies can profit,” Mark Dimondstein, president of the 200,000-member American Postal Workers Union, said in a statement last month.

The collapse or privatization of the Postal Service could have disastrous and far-reaching implications, including for the prospect of nationwide vote-by-mail, which advocates say will be necessary to safely hold the November elections amid the Covid-19 pandemic.

Vanita Gupta, president and CEO of the Leadership Conference on Civil and Human Rights, tweeted late Wednesday that it is “hard not to be cynical about the motivations” behind DeJoy’s appointment.

“It’s an ominous sign,” said Gupta. “The U.S.P.S. is a public good. So many jobs especially for people of color and delivery of essential items depend on it. And our democracy (vote-by-mail, the census) amid COVID-19 depends on it.”

In a letter to members of Congress on Wednesday, more than 100 advocacy groups urged lawmakers to “act now to save the USPS, the hundreds of thousands of jobs included in its diverse workforce, and the communities that depend upon this critical federal agency.”

“A vote against adequate, timely funding for the U.S.P.S. is an anti-civil rights vote,” the groups wrote. “At a time where people in America need the Postal Service more than ever, we must prioritize funding to ensure that this agency has the resources it needs.” 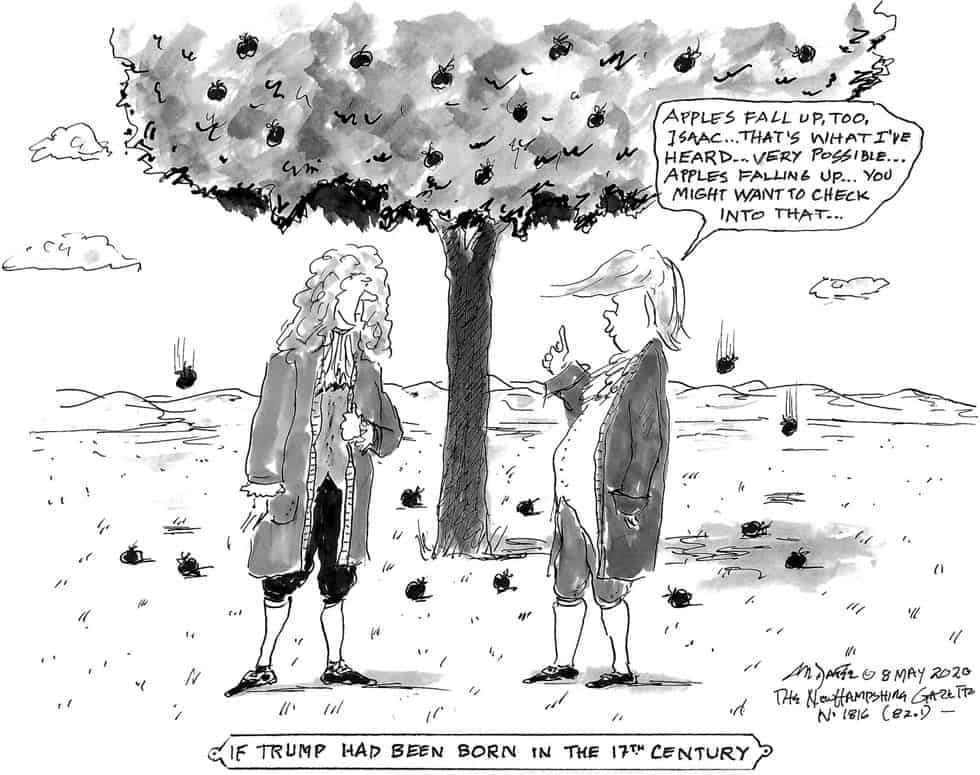 In light of the pandemic, the deadline for Yarnold scholarship applications has been moved from May 23rd to July 15th.

As described in our paper of April 10th, Sam and Alice (Pinkham) Yarnold—classic New Englanders: frugal, industrious, and married for 52 years—left a $800,000 legacy which now provides scholarships ranging from $1,000 to $5,000 to New Hampshire residents already in the process of post-secondary education pursuing careers in nursing, medicine, or social work.

The Latest From & About The Newsroom

Welcome to Volume 264, No. 17 of The Nation’s Oldest Newspaper™—our fourth consecutive Special “Germ-Free” Digital Edition. Please don’t try to wrap fish with it—you will be disappointed.

For the record, we remain committed getting back to newsprint ASAP. Alas, we have no idea how long it may take to emerge from this involuntary chrysalis, or what we’ll find when we do. Our distribution method—free distribution, by volunteers wherever possible—requires a fair amount of foot traffic passing through public spaces and going into private places of business. A return to that would seem to require a vaccine as a prerequisite. President Doofus’ pipe dreams to the contrary, we don’t expect to see one for at least a year or so.

At least our spiffy new website is working well, and drawing a positive response—and, out the window, buds are exploding.