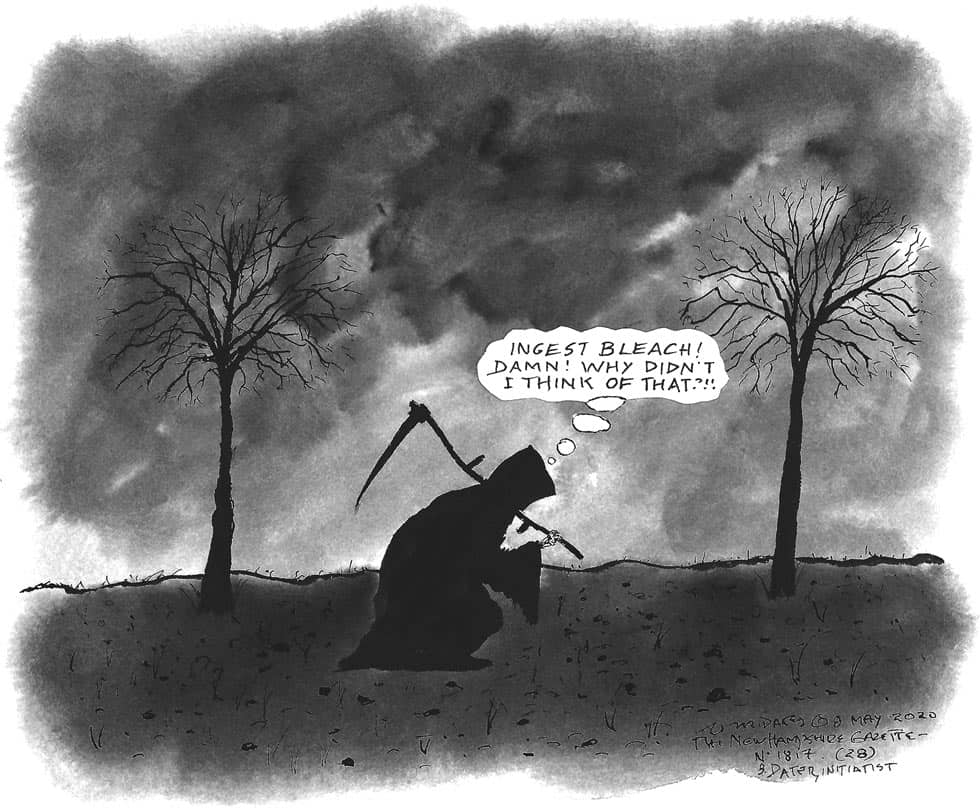 According to a chart made public Tuesday by the White House Council of Economic Advisors—certainly an assemblage of experts in their field, and what field could be more relevant than economics?—the U.S. daily death rate from Covid-19 should be dropping to zero in about a week. How fortunate we are to have Donald Trump as our President—as he explained to the nation at length on Sunday from the Lincoln Memorial.

The former owner of the Miss Universe Beauty Pageant clearly feels a special affinity for that stately structure. Before he was even inaugurated he used its steps—from which Martin Luther King once delivered a speech for the ages—as the site for a concert featuring Lee Greenwood and Toby Keith, with a harangue from Jon Voight thrown in for good measure.

Last year the former Provost of Trump University again used the monument as a backdrop, speaking for 45 minutes prior to the annual Fourth of July fireworks display.

“Our nation is stronger today than it ever was before,” he said that day—a manifestly inaccurate statement, to using the kindest possible euphemism. He then repeated this claim, slightly rephrased, as is his tedious wont: “It is its strongest now.” The pandemic has retroactively made this boast more or less true.

On Sunday, the former CEO of Trump Steaks truly outdid all previous efforts at sullying the monument to our martyred 16th President. Although any such activity is specifically prohibited by 36 CFR § 7.96 of the Code of Federal Regulations, he arranged to be interviewed by Fox News as he sat upon his ample rump within the nation’s sanctum sanctorum.

Naturally we wanted all the sordid details. It turns out that authority over the use of the Memorial falls to the National Park Service, overseen by Secretary of the Interior David Bernhardt. After decades spent wearing out revolving doors during alternating stints as an energy lobbyist and an unelected bureaucrat, Bernhardt would be a perfect target for the epithet “swamp creature,” were it not for his immunity due to party affiliation.

Bernhardt issued an 883-word statement justifying this desecration. It said, in part, “Given the extraordinary crisis…and the need for the President to exercise a core governmental function to address the Nation…I am exercising my authority to facilitate the opportunity for the President to conduct this address within the Lincoln Memorial….” Of course—because the Oval Office is just…so déclassé.

“Understandably,” Bernhardt went on, “the President has, very deliberatively, made the decision to address this national crisis at the Lincoln Memorial.” Possibly unaware that his minion had spilled the beans—but surely not caring—El Presidente tried, during the event, to shift some responsibility for the choice of venue onto Fox: “I did say this would be nice, but I thought it was your choice, not ours?”

Bernhardt’s statement also revealed an expectation that the surroundings would have a magical effect on his boss: “I anticipate…Lincoln’s powerful presence and the solemnity of the Memorial to reflect on and draw from our Nation’s better angels, and to remind all of us that we can knit our often-divided Nation together in a time of trial.” Better luck next time.

When it comes to things done by #45 for which his predecessor would have been…let’s just say, treated harshly, this may be the most grotesque example yet. “Look,” Trump snarled, “I am greeted with a hostile press the likes of which no president has ever seen. The closest would be that gentleman right up there. They always said Lincoln—nobody got treated worse than Lincoln. I believe I am treated worse.”

Speaking of worse, the Centers for Disease Control [CDC] seems to have a less-optimistic view of the pandemic than the cheerful Council of Economic Advisers [CEA], cited above.

This is not entirely surprising; the CEA’s “zero deaths” chart was cooked up by economist Kevin Hassett, co-author of the comically-bullish tome, Dow 36,000. It was published in 1999, just a couple of months before the bottom fell out of the economy. To be fair, though, why shouldn’t he be upbeat? Despite his track record, he’s always been employed, if not by a Republican political campaign, then by the American Enterprise Institute—the Right Wing’s version of the WPA.

While fantasists at the CEA were postulating when the virus would disappear, like a miracle, scientists at the CDC were working on a draft report which says it’s possible that by next Wednesday we could be dying at a rate of 3,000 per day.

David “Axis of Evil” Frum, George W.[MD] Bush’s former speech writer—apparently still making the rounds on an expiation tour for his part in selling the Iraq War—wrote a piece for the Atlantic a month ago which ran under the headline “This is Trump’s Fault.” It was very long. It had to be. He was trying to catalog every pandemic-related screwup committed by the former CEO of Trump Airlines—who, incidentally, said on March 13th, “I don’t take any responsibility at all.”

If there were any justice in this world, Frum’s indictment would be sufficient to put the founder of Trump Mortgage on trial for multiple counts of nonfeasance and malfeasance. He didn’t act when he should have, and when he did act he did the wrong thing.

Epidemiologists have calculated how many American lives might have been saved if the White House hadn’t spent two weeks failing to act on its own medical advisors recommendation to introduce social distancing: as of yesterday afternoon, 44,879.

Experts say it won’t be safe to open things up until widespread testing and contact tracing are in place. They are not, but that isn’t stopping Vietnam War draft dodger Donald J. Trump.

Having already presided in three months over the deaths of more Americans than General Giap could kill in two decades, he said on Tuesday, “the people of our country should think of themselves as warriors. Our country has to open.”

1 thought on “Never Say It Couldn’t Be Worse”