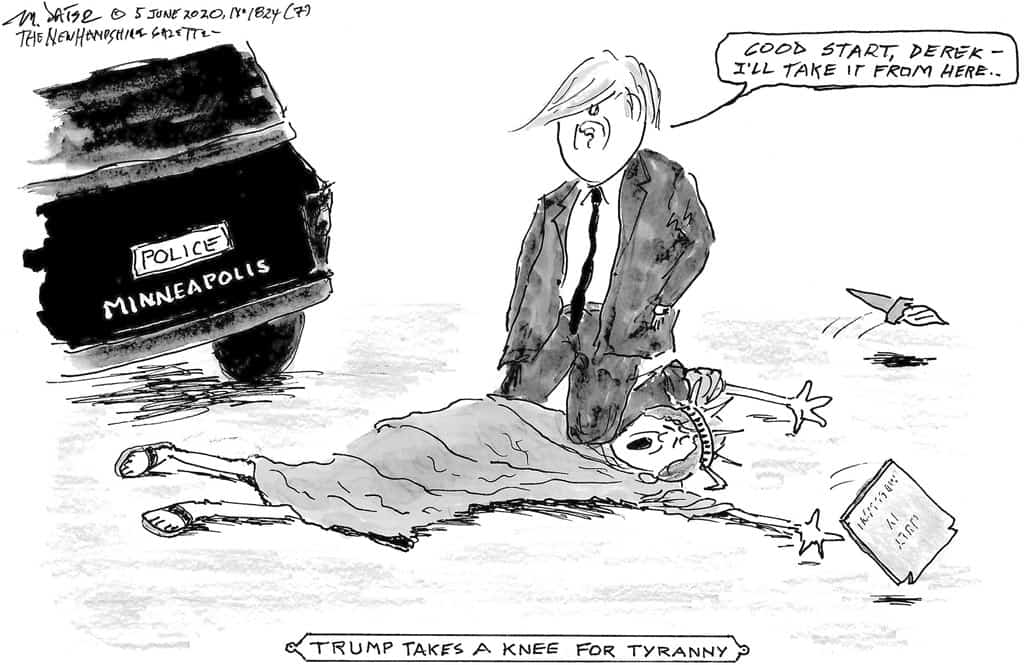 Eleven days ago, on Memorial Day, four Minneapolis police officers killed a man. One choked the life out of George Floyd by putting a knee on his neck. Two others helped by holding him down. The fourth stood watch.

One more black man killed by men in blue. It’s not a new story. It’s so familiar, in fact, that one could argue it wasn’t even news.

On the other hand, during this hyper-quantified era in which refrigerators can remotely report to homeowners how many eggs they are holding at any given time, this would certainly seem to be a number of which someone ought to be keeping track.

As it happens, deep within its labyrinthine bowels, the DOJ contains a Bureau of Justice Statistics [BJS]. It maintains an Arrest-Related Deaths [ARD] program intended “to be a census of all deaths that occur during the process of arrest in the United States.”

Early in 2015, BJS released a report assessing the ARD. Bottom line: it flunked, catching somewhere between 34 and 49 percent. What’s more, that estimate was known to be optimistic, assuming as it did that “all unobserved law enforcement agencies had zero law enforcement homicides.”

For nearly 20 years, the Human Rights Data Analysis Group [HRDAG] has been helping human rights projects around the world fight large-scale human rights abuses through the use of rigorous scientific and statistical analysis. HRDAG had the effrontery, a few years ago, to turn its very particular set of skills on the BJS report. The conclusion: it had been too generous.

“Americans are afraid of many threats to their lives—serial killers, crazed gunmen, gang bangers, and above all terrorists—but these threats are surprisingly unlikely,” HRDAG’s Patrick Ball wrote in Granta on March 4, 2016.

“Approximately three-quarters of all homicide victims in America are killed by someone they know. And the real threat from strangers is quite different from what most fear: one-third of all Americans killed by strangers are killed by police.”

Bad news for any American, worse news for African-American males. Last year a paper by the National Academy of Sciences concluded that black men are 2.5 times more likely that white men to be killed by the police.

For the average reader of this newspaper, these numbers may be shocking. None of it, probably, would have been news, though, to anyone who was at East 38th and Chicago last week.

A couple of them recorded what they saw; they showed George Floyd’s death to the rest of the world. Maybe, just maybe, that one death was one too many.

Protests began almost immediately. Minneapolis police responded by firing tear gas and rubber bullets. Far from deterring the protestors, the police response seems to have inspired others. By Thursday night, demonstrations were taking place across the country and around the world; in Minneapolis, they burned down the 3rd Precinct.

In the wee hours of Friday morning the President sent a tweet assuring the Minnesota governor that “the Military is with him all the way. Any difficulty and we will assume control but, when the looting starts, the shooting starts. Thank you!”

After years of granting him impunity, Twitter finally cited the President for “glorifying violence.” This mild chastisement seems to have bruised his ego beyond the miniscule limits of its tolerance. He vowed revenge through Federal regulation of the company he uses to keep the literate part of his base in a state of constant agitation.

Then the President’s day got worse. At about 7:00 p.m., as hundreds of protestors chanted in the vicinity of the White House, a few hopped over a temporary barricade a few hundred feet to the east. “Rattled,” according to the New York Times, citing “a person with firsthand knowledge” and a “second official familiar with the events,” Trump and his family scuttled into an underground bunker surrounded by members of the Secret Service.

The following day, his bravado restored, the most protected man on Earth boasted, “nobody came close to breaching the fence. If they had, they would have been greeted with the most vicious dogs, and most ominous weapons, I have ever seen.”

Whatever remnants of the President’s mind survived that trip to the bunker appear to have been lost over the ensuing weekend. Monday he called the nation’s governors and berated them for their cowardice, then turned the call over to the Secretary of Defense. Posse comitatus be damned, Esper exhorted the governors to “dominate the battlespace.”

From the Rose Garden, Trump then “delivered a speech,” according to the New York Times, “calling himself ‘an ally of all peaceful protesters,’ [as] the sound of explosions and the yells of demonstrators could be heard [coming from Lafayette Square]. After receiving repeated warnings to disperse before the city’s curfew, the crowd was tear-gassed.”

Attorney General Barr claims to have ordered the clearance of Lafayette Square. Perhaps that’s true; no one can lie with every word. It wouldn’t be the first time, though, that he did Trump’s bidding without being asked. Where he got the authority to command the National Guard is anyone’s guess.

Several parties were filming as Trump, Esper, and other members of this movable fiasco crossed the dominated battlespace to St. John’s Episcopal Church. At least one camera captured a chaotic scene in which cops viciously beat an Australian television crew. Another—we’re not sure whose, Leni Riefenstahl has been dead for years—captured the low-angle footage necessary for this fall’s campaign ads; nary a black protestor in sight.

Once in front of the boarded-up church, the President, had nothing to say. Ivanka Trump reached into her $1,500 purse and pulled out a Bible, which Trump held aloft; part of the time it was upside down. The White House compared the photo op to Churchill’s inspections of bomb-damaged London during the Blitz.

It looked more to us like 1922, when Mussolini marched on Rome.