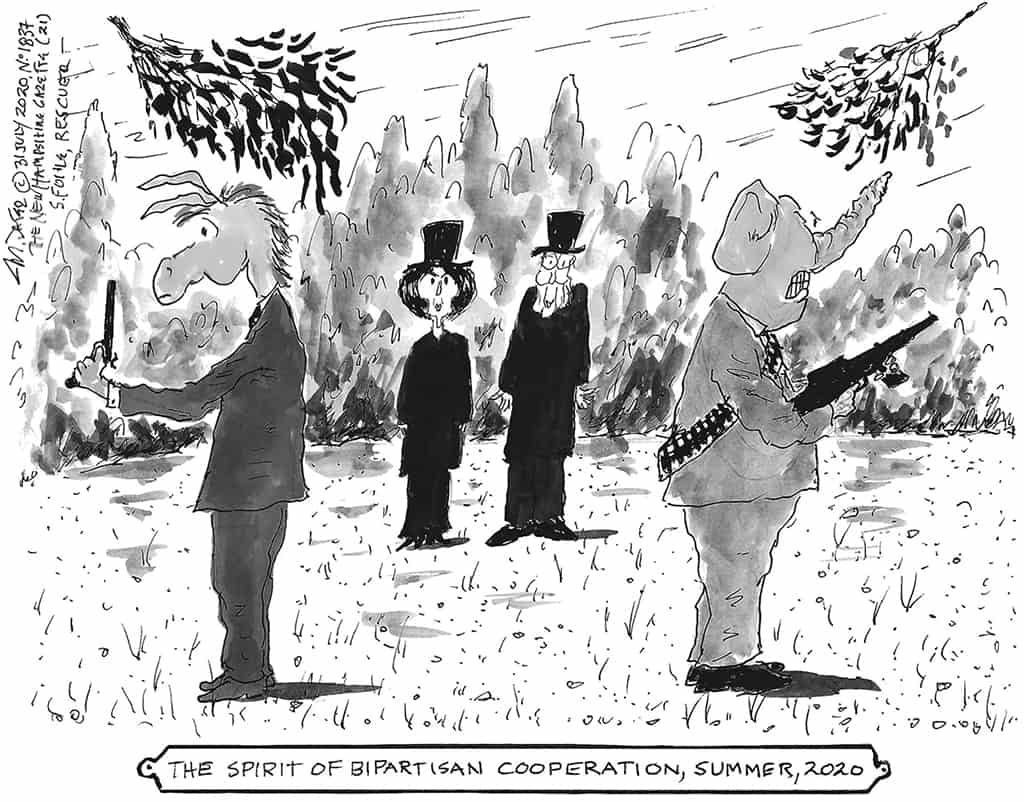 Tuesday’s Herald carried a piece by Paul Briand—one of the Hedge-Fund-Owned Local Daily’s few writers still based in this area—headlined, “Purple Principle podcast seeks political middle ground in U.S.” A five-person team is exploring “whether political factions—with blue liberals on the left and red conservatives on the right—can somehow find some common ground in the purple middle.”

In the marketplace of mainstream journalism, editors know readers are eager to start their day by snapping open a fresh paper and finding a story that gives them some slight thread of hope—a story that nurtures, however briefly or improbably, the comforting illusion that there may in fact be some way out of the Slough of Despond now engulfing us. The Purple Principal people—earnest, intelligent, and sincere—were thus a perfect subject. We wish them all the success in the world. We will now return, however, to our regular programming. Herewith, a headline from Tuesday’s Globe:

“Tom Cotton under fire after calling slavery a ‘necessary evil’ in interview with Arkansas paper.”

The junior Senator from Arkansas has taken a lot of heat since Sunday for uttering that two-word phrase. Perhaps in the purple spirit of nonpartisanship we should give him credit for bothering to include the word “evil.”

All this focus on that particular word choice has drawn attention away from the actual topic of the Cotton interview: his proposed legislation which would…wait for it…prohibit the use of federal funding for a particular educational purpose. Bet you didn’t see that coming!

Last August 14th the New York Times Magazine, on the 400th anniversary of the arrival of the first enslaved Africans in Virginia, kicked off the “The 1619 Project.” Its aim is “to reframe the country’s history by placing the consequences of slavery and the contributions of black Americans at the very center of our national narrative.” Somehow, this effort failed to show our history in a manner that always made white people look kind and noble.

“If Cotton’s [Saving American History Act of 2020] passes,” the Arkansas Democrat Gazette wrote, “school districts that embrace the curriculum [developed by the 1619 Project] would no longer qualify for federal professional development funds, money that is intended to improve teacher quality.”

The paper quoted Cotton saying “The New York Times should not be teaching American history to our kids.” It’s OK for him, though, to make sure they’re not taught.

When Cotton was elected to the Senate in 2014, stenographers journalists dutifully noted what Cotton’s PR people told them: his family had lived in rural Arkansas for seven generations. It took Historic.ly, a historical podcast, to do a little research on those generations. They make a convincing case that the Senator’s great-great-great grandfather held 12 people in bondage. What’s more, their forced labor was used to farm land taken from natives who had been forcibly removed.

It would be wrong, of course, to lay the sins of his fathers on the Senator. What’s that old saying, though? Oh, yes: it’s not the crime, but the cover-up.

In other despair-inducing news, 30 million Americans are out of work and Congress just let the $600 unemployment boost lapse.

Democrats wanted to extend it but Republicans refused. That amount is too high, they said. It takes away people’s incentive to work for starvation wages.

Republicans say they’re willing to extend the benefit, but only under certain conditions. First, the amount of the payment must be slashed to one-third of its current level. Then, the amount must be switched from a flat rate to an amount calculated on previous earnings. Because that would require re-programming the computers not once, but twice, further payments would be delayed for an undetermined period. It’s unclear whether Republicans see that delay as a bug or a feature.

This confusion over the future of unemployment benefits exacerbates another impending catastrophe. Half a million Americans are already homeless. Another 20 million renters could join them soon—disproportionately people of color, of course—because the federal moratorium on evictions is being allowed to expire.

Meanwhile, the pandemic has not gone away. Why on Earth would it, when a Google search for “Covid sex demon” brings up the President of the United States retweeting a video featuring Dr. Stella Immanuel. We’d ask Dr. Anthony Fauci for his assessment of her theories about space alien DNA, but we hear he’s busy.

We’re guessing Rep. Louis Gohmert [R-Texas] may be among Dr. Immanuel’s followers, based on his recent positive diagnosis for Covid-19. Gohmert was spotted talking—maskless, as has been his wont—with William Barr on Tuesday, shortly before the Attorney General spent a day snarling before the House Judiciary Committee. Gohmert has blamed his medical misfortune on his own behavior—against his better judgment, he recently wore a mask.

The nation is now confronted with a whole host of crises:* unemployment, evictions, virus, &c., &c.

Not to worry, though: the Democrats have a plan. House Majority Leader Steny Hoyer announced it on Tuesday. It may sound vaguely familiar: pre-emptive capitulation.

“Look, it’s not $600 or bust,” Hoyer said to CNN, about negotiations over extending the boost to unemployment benefits. Quoting House Speaker Nancy Pelosi, he added, “We don’t have red lines, we have values.”

Yes, that’s how we got into this pickle: Democrats have values, and Republicans have Gohmert.

Last week—before the fever hit—Gohmert introduced a resolution which would ban the Democratic Party because of its former support for slavery. Next will be a resolution making support for systemic racism compulsory.

Democrats were in need of a rousing, catchy slogan, to inspire their supporters as the 2020 general election looms. Now they’ve got one: “Let them eat values.”

* We despise cliches, and try to avoid them—the one that could be used here most of all.

1 thought on “Pick a Crisis, Any Crisis”