Those of us who lived in northern New Hampshire when Carl Drega went on his murderous rampage see something like this and get the chills. The chills mixed in with some serious pissed off. 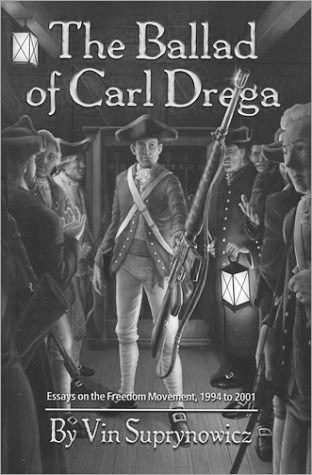 Carl Drega was a guy from Bow who had a small vacation place in Columbia—a small town near Colebrook. He was not a beloved member of the community. Drega was an angry man who was sure everyone was out to get him. He’d had code enforcement problems in Columbia. He wanted to use tarpaper as siding on his house. His house was on the riverfront, and a flood had washed some of his property away. His response was to dump a load of fill in, to “replace what he’d lost.” Dumping fill into the riverbank wasn’t met with applause. When there was an issue with a tax assessment, he shot over the heads of the selectwoman and tax assessor who came to speak with him. (The selectwoman was Vicki Bunnell)

After that, he started putting motion sensors up all over his property and stockpiling weapons. On August 19, 1997, he went out and started killing. He killed 4 people, and wounded several others. He killed 2 state troopers, Officers Scott Phillips and Les Lord. He killed Vicki Bunnell, the judge at Colebrook District Court, who was a Columbia selectwoman. Bunnell had a restraining order against Drega. When she saw him and his gun, she stopped to warn others in the building. Drega shot her eight times in the back. He also shot Dennis Joos, the editor of the Colebrook News and Sentinel. He tried to disarm Drega after he killed Vicki Bunnell.

I remember all this. I was working the night shift at a restaurant, and we were glued to the news. This kind of senseless violence on such a big scale wasn’t something any of us were used to seeing in our relatively quiet and crime free state.

Time Magazine did a half decent story about Drega and his massacre.

Why am I bringing this up? In an email exchange last night, a friend mentioned Carl Drega while we were discussing the BearCat tank the Concord Police Department wants to get. I remembered the story, of course, but I googled Drega anyway, for a refresher.

What I found was that to a certain segment of the population, Drega has become a hero. One of those people who have turned Drega from a domestic terrorist into a poor heroic victim is a guy named Vin Suprynowicz. He penned the tome you see in the picture at right: The Ballad of Carl Drega.

A Google search of Vin Suprynowicz revealed something of great interest. Vin’s a Free Stater. That’s right—Vin is a signed member of the Free State Project. He signed up in 2002. In fact, in 2002, he proclaimed himself one of the most famous and respected FSP members, on the FSP internet forum where he was holding forth about how poor Carl Drega was a victim, a man who’d had too much and had “only one option to find justice.”

Forgive me, but there’s only one thing to say about Vin: what an a__hole.

Suprynowiscz also wrote a piece called “Live Free or Die: How Many More Carl Dregas?” that was published in the Libertarian Enterprise, the same publication where the founder of the Free State Project, Jason Sorens, published his original manifesto a few years later.

It’s painful to read—to see this guy attempting to turn Drega into the heroic man o’ the people who’d been done wrong by the Man—instead of what he really was—a violent, paranoid nutcase who hated everyone and thought he was above the law.

A far better read is this point by point refutation of Vin’s nonsense by a guy named Jim Macdonald who actually lived up there and knows the story far better than a long distance libertarian from Nevada.

This is Vin Suprynowiscz. He’s a Free Stater. This is the kind of person that the Free State Project wants to bring to our state.

This piece originally appeared August 9, 2013; we publish it here with the author’s kind permission. There’s always money in the Banana Stand, and there’s always good reading at SusantheBruce—fourteen years and still going strong.

We were spurred to publish this item today by a threat of legal action from the Free State Project, which can be found on page four, along with our response.

Ms. Bruce referred her readers to Jim Macdonald’s work on this sad and sorry story. His excellent work is still available online in three parts: Part I, Part II, and Part III.