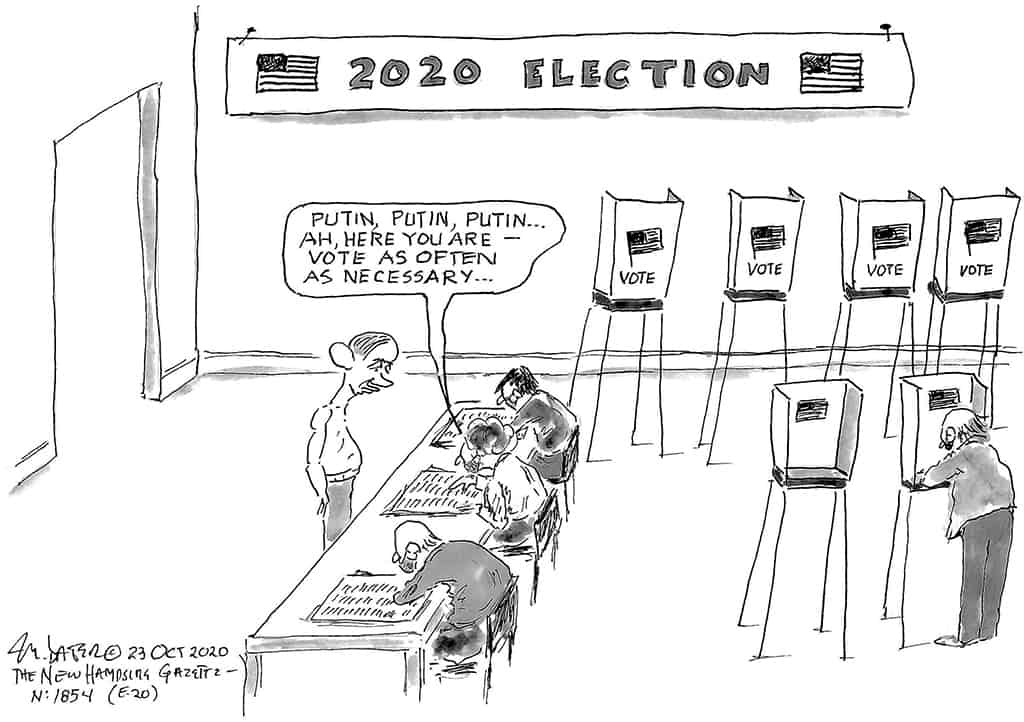 Just a few days ago, an e-mail acquaintance of mine sent me this:

“Gotta admit I’m voting for Trump because I fear what happens if he loses. Who is Trump running against? I don’t think that Joe’s cognitive skills are up to the task. I think almost everything he says has been scripted for him.

“Harris? I’m not even sure Joe picked her. Look at the horrible claims she made against him while she was still campaigning—and now they’re buds? I have to believe that powers behind the scenes have designs on how they’ll direct Joe on what his policies will be. If, for some reason, he’s unable to complete four years and Harris takes over, she’ll have to go along with the plans made for Joe. If she didn’t agree to those terms, she wouldn’t have been picked for the VP slot. If the democrats take the white house, I’m afraid we’re in for an extreme radical-leftist shift. Maybe some folks think that’s what we should have.”

Here is my reply:

“I have to admit that I was taken very much by surprise when I read your e-mail yesterday. I spent a good deal of last night awake, thinking about all of this. This morning I went back and re-read our entire exchange of e-mails and letters going back to June 9, 2019. And I see a very distinct, clear pattern.

“In your very first letter, you write, ‘I highly value your opinions. My question is about the aftermath of Tet. If the Americans would have/could have followed it up with smashing great force against the Viet Cong and NVA, would the war’s end have been different? It seems that Tet was a military disaster for the communists. The American media did everything it could to portray the United States as the Tet Offensive’s loser.’ And you go on to repeat multiple popular myths about the war that have no basis in fact.

“In response to your first letter, I sent you a long and detailed e-mail explaining the reality of what was happening in Vietnam, citing for you a number of factual historical sources and references. Over the next weeks and months, you returned with a number of questions, each of which was based—forgive me, please—on a serious lack of factual knowledge. (One I particularly remember was your staggering misbelief that ‘the Chinese effectively still are in charge’ of Vietnam when in fact the two peoples are mortal enemies.)

“I had hoped that by my taking the time to respond to so many of your questions in such detail, you would begin to realize that what you believe and how you see the world are based on a serious lack of knowledge. You subscribe to a view of the world that is without foundation or support in historical reality.

“If I managed to teach you anything at all about history, none of that translated into an understanding of the political situation we are facing in this country today. You believe that if Biden wins, the country will become ‘extreme radical-leftist.’ Joe Biden is about as vanilla mainstream as a politician can get. There is absolutely nothing ‘extreme radical leftist’ about him. His record over the years is almost painfully moderate, middle-of-the-road. (Indeed, a big reason I am not hugely enthusiastic about him is because he is not progressive enough.)

“And as for Kamala Harris, she was a prosecutor and state attorney general. This is not exactly ‘extreme radical-leftist,’ even in California.

“And who are these ominous ‘powers behind the scenes’ who are directing Biden, and will direct Harris if she takes over? The evil Deep State that is out to hand the U.S.A. over to China or Antifa or the Mexicans? The secret supporters of Bernie Sanders, who have somehow infiltrated and taken over the Democratic party even though they couldn’t manage to finagle Bernie’s nomination? Are you a follower of QAnon? Where do you get these ideas? What knowledge are your beliefs based on?

“I happen to know Joe Biden as it turns out. His nephew went to the school where I taught, and I coached him for four years, advised him for three years, and taught him for two years. I got to know the boy and his parents very well, and through them met Joe Biden on a number of occasions. He is not a doddering old senile septuagenarian. He is sharp as a tack and in far, far better physical health than our current president. Moreover, Joe Biden is a decent man.

“Meanwhile, our current president is a bullying, blustering, narcissistic, racist, sexist, lying, cheating, selfish, truly ignorant grifter who has spent four years thumbing his nose at the Constitution, dismantling the institutions created by that document, and riding roughshod over the separation of powers. He has seriously damaged American democracy, courted dictators, insulted allies, and encouraged rightwing violence. And he has done this with the support of Republicans like Mitch McConnell and Lindsey Graham. He has made our nation the laughingstock of the world—I have contacts in Britain, Germany, France, Spain, Italy, Austria, Australia, India, Japan, Thailand, and Vietnam, and I can tell you that people in those countries are scratching their heads and wondering if Americans have lost their minds.

“I will also say this: I am far less afraid of a disorganized mob in the streets throwing bricks through store windows than I am of organized militias dressed in full body armor and carrying AK-47s and AR-15s. If you could listen to Donald Trump tell the Proud Boys to ‘stand back and stand by,’ and not feel the shivers running up and down your spine, then you and I really do have nothing in common.

“I sincerely hope that is not the case. In the first letter you ever wrote me, as I said, you wrote, ‘I highly value your opinions.’ I hope that is true. And I hope that you will reconsider your beliefs about the possible consequences of this election. Historical analogies are never completely accurate because every situation is different. But it is worth remembering that Joseph Stalin, Benito Mussolini, and Adolph Hitler all came to power legally, as did Vladimir Putin. I fully believe that if Donald Trump remains in office—by hook or by crook—another four years, you can kiss American democracy goodbye.

“If you truly value my opinions, you will think long and hard about what I’ve said in this e-mail.”

1 thought on “Why I’m Not Voting for Donald Trump”