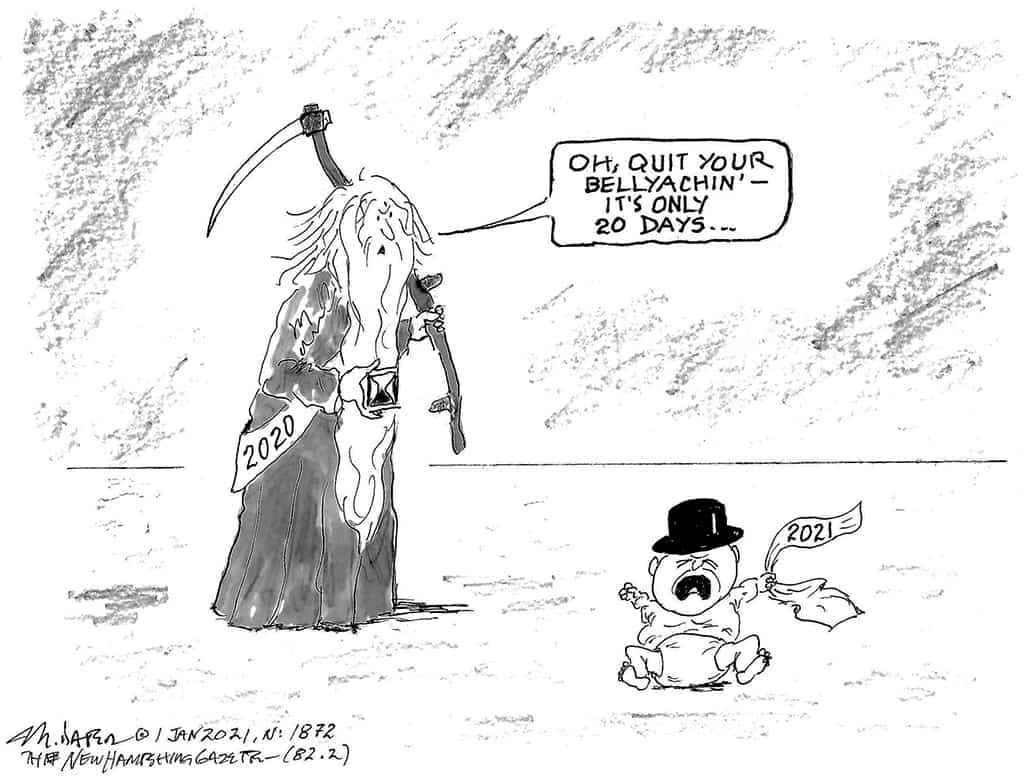 On the anniversary of the 1791 ratification of the Bill of Rights, two pro-democracy human rights groups, Democracy Unlimited and Move to Amend, are calling for mass public participation to envision a more just and democratic U.S. Constitution. Toward a People’s Constitution is a website [www.PeoplesConstitution.US] launched last week to provide an inclusive and participatory arena for a respectful, vigorous and strategic discussion to create an authentic people’s constitution.

The effort is based on the growing realization that many of the current major crises our nation is facing—inadequacy of providing basic human needs, the contested 2020 election, corporate rule, climate and ecological destruction, declining public trust in government, growing illegitimacy of the Supreme Court and lack of basic rights still for women, people of color, the LGTBQ community and others—all are rooted in a flawed Constitution and multiple judicial decisions.

“It’s time for people to engage with one another to envision a constitution that goes way beyond the original Bill of Rights, the first 10 Amendments to the U.S. Constitution affirming basic political and religious rights to individuals in the new United States of America, and beyond the other 17 Amendments added since,” stated Jessica Munger, Program Director of Move to Amend. “A more just and democratic constitution must go even farther than the call of President Roosevelt for a Second Bill of Rights at the end of WW II to provide the rights to housing, income, food, health care and other basic human needs to also include rights to authentic political, racial and gender equality and rights that protect our natural world from ecological collapse,” said Munger.

Toward a People’s Constitution seeks to dispel the dominant cultural mindset that the Constitution is comparable to a sacred text and considered, for the most part, indisputable and beyond the right of We the People to seriously examine.

The project will include ongoing speakers and panels, share information from past and present efforts in the U.S. and around the world on constitutional renewal, and invite and engage participants to share and discuss ideas and proposals for ways to make the Constitution more relevant, to democratically, justly and sustainably address the systemic problems of our nation and world.

The project will also build upon the several People’s Movement Assemblies organized by participants of both sponsoring groups over the years, including a recent Peoples Movement Assembly where more than 100 people collectively discussed and envisioned what a currently relevant constitution might contain.

This process is open to all individuals and organizational representatives who feel that self-governing people should take charge of their conditions. For more information and to join this process, go to www.PeoplesConstitution.US.

[Note: We would only add this—while this newspaper enjoys, and will never relinquish, its freedom to indulge in friviloty and foolishness, at heart we are deadly serious; never more so than on this topic. Careful readers may have noted recently a tendency of ours to explore a topic, excoriate its inherent idiocy, then conclude by noting that such a result is inevitable under the terms of our Constitution. It is heartening to see that someone is tackling this taboo topic head-on. – The Ed.]

Gov. Sununu, Sec. of State Gardner Are Both Summarily Fired

Sununu the Lesser Hoist on Own Petard

“Last night @WMUR9 teased a segment about rescuing loons,” tweeted Jim Byrd [@jimbyrdpmm] on December 29th. “I thought it was about @NHGOP.”

Byrd’s problem, we’d venture to say, did not stem from West’s work. She is a diligent reporter and a lucid writer, if perhaps a bit circumspect. There’s only so much one can do, though, when trying to unscramble an egg. Here’s how she approached the topic:

“CONCORD–A half dozen elected state Representatives and about 80 citizens gathered Dec. 21 on the State House steps to support a Declaration of Independence for New Hampshire calling for the ‘Termination of office and Termination of the ‘state.’

“Most were not wearing masks and many oppose masks and the government shutdown, are disturbed by absentee voter expansion and Gov. Chris Sununu’s emergency power declarations, according to Daniel Richard of Auburn.

“Richard has organized the N.H. Committee of Safety but said those signing the Declaration included an ad hoc group of individuals not affiliated with any one organization.

“The November elections are ‘void for fraud’ as are Sununu’s expanded emergency powers due to COVID-19 because both violate the Constitution, Richard said.”

A video of the event was posted online by FreeKeene, which is, or was, a part of the Free State Project. It can be difficult to pin down facts about this would-be libertarian utopia. Having subjected ourselves to more of the video than is probably healthy, we offer the following transcription of Daniel Richard’s introductory remarks:

“We are going to declare our Right of Revolution under Article Ten of the State Constitution. It’s never been done. The founding fathers were geniuses; they left us a road map and an exit plan. The exit plan was, if we ever got to a point where our government no longer lived by our social compact called our state constitution, that we the people—not an individual, we the people—can fire them. We can reform our old form of government, or create a new form of government. And so that’s exactly what the founding fathers did when they wrote and declared their independence on July the Fourth of 1776.”

Richard, whose demeanor suggested great comfort in his self-assigned role, then read his entire eight-page “Declaration of Independence, Public Notice, Termination of office and Termination of the ‘state’”. Not having access to the Capitol’s second-floor balcony, he had to do so from the building’s front steps.

On Monday, December 21st, surrounded by supporters on the steps of the State Capitol in Concord, Dan Richards fired Governor Sununu and Secretary of State Gardner and dissolved the Government of the State of New Hampshire. Or, about a hundred people assembled and acted out a shared delusion; to the best of our knowledge, both officials are still on the job. Note the absence of masks—that appears to be the point.

Beginning with the obligatory, “When, in the course of human events…,” the document goes on, and on, cribbing extensively from Thomas Jefferson. Where appropriate—if that’s the right word here—it slips in a few references to New Hampshire. It also substitutes, in place of King George III, the Governor—“whose character is thus marked by every act which may define him a tyrant [making him] unfit to be the executive of a free people.”

The audience listened docilely throughout the 20 minute performance. It ended with the obligatory pledge of “Lives…Fortunes…and Sacred Honor,” which prompted cheers and cries of “Yeah, baby,” “You’re Fired,” and “Bring Back Mel Thomson.”

Richard and his merry band of insurrectionists then trooped off, around the corner, to the Department of Justice.

The receptionist there responded with remarkable equanimity to the following statement from Richard: “We’re here to let the Attorney General know that we the people just fired him. We’ve declared our independence we’re exercising our right under Article Ten, Right of Revolution. We have a social compact called the state constitution and he apparently he has never read the document….”

Attorney General Gordon J. MacDonald was not available to meet with the people who had just fired him. They did get a consolation prize, though: their Declaration now bears an official stamp from the government they had just abolished:

We haven’t heard how Governor Sununu is holding up. No one wants to lose his job in this economy, but he’ll probably be OK. Lucky him: not everyone has a father who’s part owner of a gold mine.

Not to be a scold, but he brought this on himself. He stoked the flames on October 31, 2016, when he complained on Howie Carr’s radio show that Democrats were bringing in voters by the busload.

Apparently Chris Sununu didn’t get the memo ’splaining that he’s been fired. What’s more, he plans to be inaugurated again—and the public is not invited.

Purporting to still be Governor, Sununu issued a statement Wednesday saying, “For weeks, armed protesters have increasingly become more aggressive, targeting my family, protesting outside my private residence, and trespassing on my property. An outdoor public ceremony simply brings too much risk. We do not make this decision lightly but it is the right thing to do.”

An outdoor, public ceremony had been planned for January 7th, to take place on the State House grounds in Concord. The would-be Governor’s reference to “trespassing on my property” suggests that he might try to seize the Capitol by eminent domain. Such a scenario is, of course, pretty far-fetched—or would have been if the town in which Sununu lives had not just trimmed the First Amendment on his behalf.

On December 22nd, the Newfields Board of Selectmen passed an ordinance prohibiting “Residential Picketing.” The motion was seconded by Chris Sununu’s brother Michael C. Sununu. NHJournal interviewed a lawyer specializing in civil liberties about that ordinance, for an article posted December 29th.

“‘The ordinance is clearly unconstitutional under the First Amendment,’ says Harvey Silverglate, who served on the board of the Massachusetts chapter of the American Civil Liberties Union and is the co-founder of the free speech organization Foundation for Individual Rights in Education.

Sununu has been a supporter of President Donald Trump since the failed casino owner flim-flammed his way into the Republican nomination. To the best of our knowledge, Sununu has yet to repudiate Trump’s laughable claim that he won the November 4th election.

A Gem From Our Spam Folder…

“MAGA Deals. Hats 60% Off. Today Only. To celebrate President Trump’s declared victory. The most popular hat, the hat that started it all. This is sure to be the most important victory EVER!”

Our Socially-Distancing Photographer briefly emerged on Monday to assess the general situation. In keeping with rituals which no doubt predate written language, a large conifer has been severed from its roots and placed on view—a Druidic sacrifice if ever we’ve seen one. Though only five of them appear in this image, our semi-intrepid explorer concluded that there were far more featherless bipeds out and about than could be justified by any definition of necessity.

Presuming that Senate Majority Leader and uncrowned Constitution-Overrider-in-Chief Mitch McConnell has no last-minute objections, Congress will meet in joint session on January 6th to count the votes of the Electoral College. This time-honored ritual has been the centerpiece of the nation’s Peaceful Transition of Power™ since the Federalists lost their mojo, early in the 18th century.

Usually the very definition of pro forma, the ritual this year is expected to get real messy, real quick. Senator Josh Hawley [R-Mo.], and a hatful of Republicans in the House, are threatening to…do some damn thing or other. We’re not entirely sure, and we’re not convinced that they know, either.

We can report that recently-pardoned Roger Stone is Zooming in for interviews on MAGA-happy websites touting his “Stop the Steal” scam. While this appears to be a reaction to Trump’s 2020 defeat, CNN reported in November that “Stone’s political action committee launched a ‘Stop the Steal’ website in 2016 to fundraise ahead of that election, asking for $10,000 donations by saying, ‘If this election is close, THEY WILL STEAL IT.’”

“Stop the Steal” has been latched onto by so many obvious grifters, we’re beginning to think of it as open source; like certain software, the basics are just up for grabs. Anyone who can make a buck with it sets up shop, and nobody seems to mind.

Of course, there’s no one like the man himself—today’s answer to Harry Gondorff—the former proprietor of Trump Plaza Hotel & Casino, Donald J. Trump. To fleece the rubes showing up on the 6th, his Trump International on Pennsylvania Avenue has jacked up the rates for a single room from $476 to $3,605.

Meanwhile, Atlantic City is raffling off chances to push the button that will blow up the Trump Plaza Hotel & Casino on January 29th.