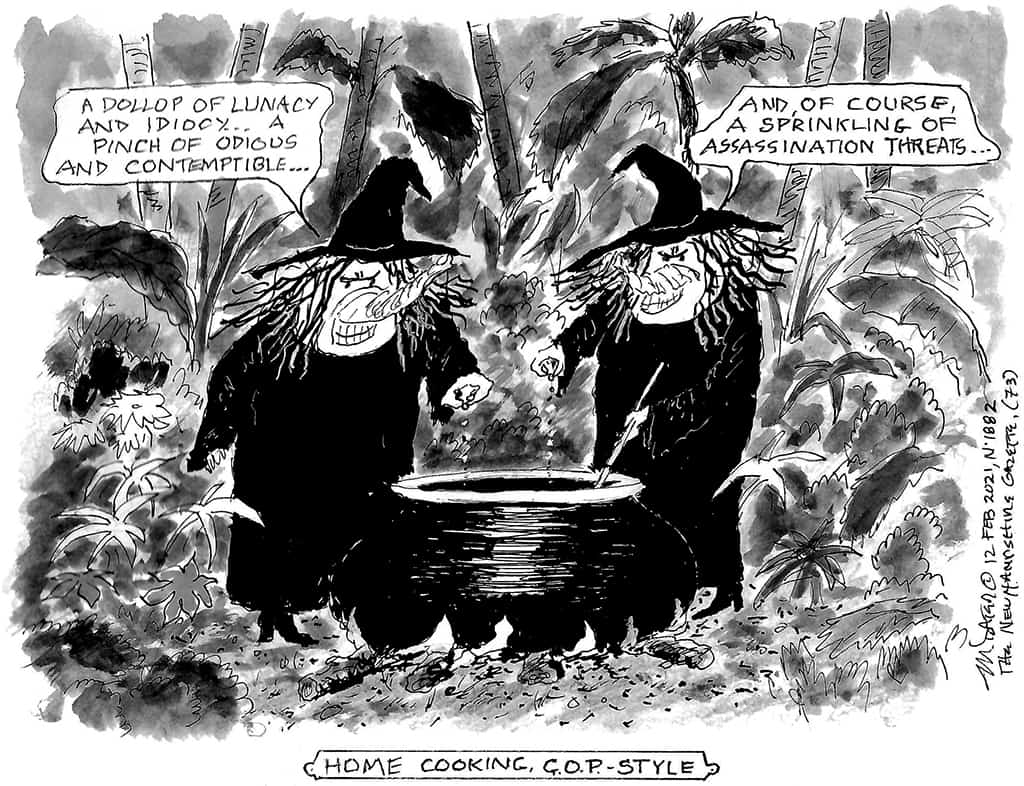 President Biden has nominated Rep. Deb Haaland [D-N.M.] to be Secretary of the Interior. If she’s confirmed, that will be historic; Haaland would be the first Native American to serve in the Cabinet. Haaland is an enrolled citizen of the Pueblo of Laguna, and refers to herself as a 35th-generation New Mexican. The Puebloans, she said in an address to the 2020 DNC convention, migrated to the Rio Grande valley in the late 1200s.

Naturally, since Haaland is demonstrably not a white male Republican, there have been some objections. Senator Steve Daines [R-Mont.] released a statement saying, “After our conversation, I’m deeply concerned with the Congresswoman’s support on several radical issues that will hurt Montana, our way of life, our jobs and rural America, including her support for the Green New Deal and President Biden’s oil and gas moratorium, as well as her opposition to the Keystone XL pipeline. I am also concerned by the responses I received about the role of the Department and lack of appreciation for issues that impact Montana such as wildlife management and hunting and sportsman access. I’m not convinced the Congresswoman can divorce her radical views and represent what’s best for Montana and all stakeholders in the West. Unless my concerns are addressed, I will block her confirmation.”

On his first day in office Zinke rescinded a ban on the use of lead bullets, shot, and fishing tackle on public lands. He also required his staff, whenever he was in the building, to run the Department of the Interior flag up the pole. During his brief tenure he frequently voted in opposition to environmentalists on issues including coal extraction and oil and gas drilling, according to Wikipedia, receiving a four percent lifetime score from the League of Conservation Voters. He also came under scrutiny for allegations of improper use of government aircraft.

It was blocking casino licenses in Connecticut, after lobbying from MGM Resorts, that got him in the most lasting trouble. The Interior Department Office of Inspector General investigated him, and prosecutors for the Department of Justice convened a grand jury. Last November the Washington Post reported that in late 2019, “Deputy Attorney General Jeffrey A. Rosen deferred a bid from line prosecutors to move forward with possible criminal charges against former interior secretary Ryan Zinke, saying they needed to gather more evidence and refine the case….”

Daines also backed William Perry Pendley when President Trump nominated him to run the Department of the Interior’s Bureau of Land Management. Pendley is a white male Republican who apparently believes in privatizing all federal lands. Seriously. He wrote in the National Review, in 2019, “The Founding Fathers intended all lands owned by the federal government to be sold.”

Data For Progress took a survey which asked voters whether they “support or oppose several of President Biden’s policies that will be implemented by Haaland and the Department of the Interior.” Julian Brave NoiseCat and Danielle Deiseroth “found that contrary to the opinions of Daines, Barrasso, and Stauber, these policies are all quite popular with voters across the political spectrum.

The writers note that “All of the policies tested enjoyed net support among all voters”—a sentence we wish we could drill into the heads of every reporter for NPR, and all the other other mainstream journalists who are chronically unable to break free from the framing that has been erected around these issues by paid shills for the Industrial Death Machine.

Broad support for sensible environmental policies—which all Republicans and not a few Democrats would call wildly radical—is about what we expected. Americans are not so crazy as the Trump era has led us to believe. The surprise was this:

[Note: Some readers may be wondering about the name of one of the authors cited above, Julian Brave NoiseCat. Here is a biographical note: “Julian Brave NoiseCat is an enrolled member of the Canim Lake Band Tsq’secen in British Columbia, where he was recently nominated to run for Chief. Julian grew up in Oakland, California and studied history at Columbia University in the City of New York. He plans to shake the hand that shakes the world.” That note is appended to an article published at Salon, headlined, “The Rhodes scholarship wasn’t designed for my people—that’s why I had to win.” – The Ed.]

A vandal’s work is never done. Since Louis DeJoy’s appointment as Postmaster General last June, the performance of the U.S. Postal Service has deteriorated to an alarming degree. True, most mail does still get through—eventually. For now, anyway. Give DeJoy time, though; he’s not done yet. He has further plans, as yet unimplemented, which he claims will bring yet more “efficiency” and “savings.” Tossing this mailbox on the scrap heap, perhaps? We have a piece on page six, by Common Dreams staff writer Jake Johnson, with all the sordid details.

Maine’s largest health network is being condemned this week by organized labor leaders, a local editorial board, and elected officials after it vaccinated union-busters who traveled from Florida and New York to the Pine Tree state to undermine a unionization effort at a Portland hospital while the state’s frontline workers and eligible residents in high-risk groups were forced to wait, according to Common Dreams staff writer Kenny Stancil.

“Every out-of-state consultant and lawyer that MaineHealth flew in as part of their intimidation campaign got the vaccine instead of someone’s grandparent or loved one,” Maine Senate President Troy Jackson, a Democrat from Allagash, said in a statement Tuesday.

“It’s concerning,” Jackson added, “that MaineHealth would put their own anti-union agenda, and their own bottom line, ahead of the health and well-being of Maine people. At a time when Maine has only a limited supply of the Covid-19 vaccine and is still grappling with a public health crisis, this seems particularly cruel.”

Portland Press Herald columnist Bill Nemitz on Sunday detailed how MaineHealth offered vaccines to all 22,000 of its employees, including those “who perform billing, scheduling, marketing, or other administrative tasks that involve no contact whatsoever with patients or frontline medical staff.”

Even though inoculating remote staff violated Maine Center for Disease Control and Prevention rules, MaineHealth CEO Bill Caron on Sunday defended the hospital’s decision to do so, claiming in a letter to the network’s board of trustees that he was “protecting the valuable resource of healthcare infrastructure which has been entrusted to us.”

Even harder to justify, however, was Caron’s decision to vaccinate employees from two anti-union consulting firms who were brought in from out of state to crush a unionizing effort led by nurses at Maine Medical Center, MaineHealth’s flagship hospital in Portland. Not that he didn’t try to apologize.

In a statement released Monday, MaineHealth characterized the union-busters as a “small number of individuals from out of state who were brought into Maine Medical Center to provide support to nurses and managers in answering questions about the impact of joining a union.”

National Nurses United and the Maine State Nurses Association filed a petition with the National Labor Relations Board on January 12 to represent the 1,600 full-time, regular part-time, and per diem nurses at Maine Medical Center.

According to Nemitz: “Reliant Labor Consultants representatives, along with those from a New York City law firm that represents employers in labor organizing efforts, received Covid-19 vaccinations while in Maine. This despite a crystal-clear statement on the Maine CDC’s website that Maine vaccines are for Maine residents only.”

In response to Nemitz’s column, MaineHealth said that “we understand that non-Maine residents are not eligible for any vaccine and acknowledge that we erred in vaccinating those individuals.”

“Vaccinating out-of-state contractors who came here to disrupt a union organizing effort,” Mills said in a statement, “was an insult to the hardworking nurses trying to assert their rights and to those who are waiting patiently for their turn—the 80-year-old grandmother who hasn’t seen her family in months, the man being treated for cancer, the teacher wanting to return to the classroom, the grocery clerks and delivery drivers who are exposed to the public and working to put food on the table.”

The above was excerpted from a longer piece, https://bit.ly/3qfNKMF, created by Common Dreams and licensed under a Creative Commons Attribution-Share Alike 3.0 License.

In an unusually purposeful display of initiative, our Wandering Photographer, aka W.P., moseyed over to the Foundry Place Parking Facility to conduct an experiment on Wednesday. Meanwhile, in the Capitol Building, in Washington, D.C., a former President—whose name will come to us shortly, we’re sure—was on trial. Although the high crimes of the individual in question were exhaustively documented, it was a foregone conclusion, in mid-week, that the perp would be exonerated. W.P. claims that this image shows a slight degree of blurring in the vicinity of William Whipple’s grave. This effect would be consistent, he claims, with the sort of vibrations which would be caused if the occupant were spinning.

Oxford University pledged in April to give away rights to its coronavirus vaccine. “A few weeks later, Oxford—urged on by the Bill & Melinda Gates Foundation—reversed course,” Kaiser Health News reported on August. The university “signed an exclusive vaccine deal with AstraZeneca that gave the pharmaceutical giant sole rights and no guarantee of low prices—with the less-publicized potential for Oxford to eventually make millions from the deal and win plenty of prestige.”

Global Justice Now, February 11th: “AstraZeneca’s bumper profits today show the company can easily afford to provide its Covid-19 vaccine at cost price during the pandemic and beyond. But despite this pledge, it has yet to address the question of why lower-income countries like South Africa and Uganda are paying several times more per dose than the European Union.”

In our last few papers we’ve used this space to work on the editor’s addiction issues. Here we are again: he’s still jonesing for newsprint.

We don’t mean to mock those with real substance abuse problems, but note the word choice above: “the last few papers….” What papers are those, Chief? In about a month, it will have been a year since we’ve seen any freshly-inked newsprint around here.

We thought about possibly curbing this impulse, on the theory that the space could be better used. Instead we’ve decided to just let him continue. It’s otherwise harmless, and seems to have a placebo effect.

Also, it will serve as a notice to our online readers that we’re still committed to breaking free of this nebulous digital space and getting back into the three-dimensional, oxygen-dependent real world, where our paper—on paper—can annoy unsuspecting people at random.